SkyLuv has just unveiled the next four Figures of their awesome Love Hina action figure line. If this is new to you, you may want to check this older edition of Speedlines that covers who SkyLuv is and what they've been up too with the Love Hina license; if you've already read that then skip right on ahead. Basically SkyLuv is the combined efforts of Epoch's C-works division and Kaiyodo on a mission to make the best Love Hina figures ever. Well enough gabbing, here are the new figure pictures Epoch updated with:

Please note that those are the new updated release dates. While the price point has remained the same 2980 yen [about 23.50$US] Kaolla, and Sarah have risen in price a bit from what was previously reported to 3980 yen [about 30$ US] because they are a two-pack. Also don't forget Bandai Entertainment releases the first Love Hina DVD in the US on February 19th - highly recommended watching.

Onimusha gets the 12-inch treatment.

Mcfarlane Toys has the rights to make Onimusha 2 figures that they'll be showing off at the fast-approaching Toyfair 2002. But what about Onimusha 1? What about the main characters from Onimusha 1? Well fear not, Dragon will be delivering a long overdue 12-inch versions of Samanosuke and Kaede the main protagonist from the very first Onimusha video game. Dragon unveiled these new figures at the recent Hong Kong Toy Fair. These are highly articulated, and come well armed as well, Samanosuke sports 3 of his powered up blades he used in game, while Kaede sports her little sword and rump tattoo. Dragon put up coverage of the Hong Kong Toy & Games Fair on their website, click here to check out some of their other offerings like last year's Resident Evil and Legend of Zu 12 inchers.

Wonder if Dragon will make a panda costume variant for Samanosuke? ;-p

Rockman EXE on the way

It was only a matter of time... with some top selling Gameboy Advance games, and a new Anime series on the horizon what better time for Rockman EXE toys. So now the newest incarnation of Rockman [AKA MegaMan as he"s known in the US] is getting action figures from Bandai. These will be 1200 yen [about 9$ US] and come out this May.

The last edition of Speedlines covered the new Capcom Queens extensively, so if you missed it, check that out first then check back here. Moby Dick is revealing some new extremely early prototype shots of the Queens on their website. Keep in mind that these are still a little on the rough side and still in the process of being worked on, the finalized product will differ a whole lot from what you see here. Also keep in mind some of the coloring was done in photoshop and isn't on the actual figure. Just click on the Capcom Queen you want to see.

These super articulated dollgures will be able to recreate all the famous fighting moves from the various Capcom fighting games. Chun Li can do her spinning bird kick, Morrigan can do her Soul Fist and Darkness Illusion, Cammy can do her Cannon Spike and winning pose and Lei Lei can... uh... throw stuff. The price has also changed from what was originally quoted last time. Instead of 1980 yen it turns out Chun Li and Cammy will be 2280 yen [about 17$ US], Morrigan will be 2380 [about 17.90$ US] and Lei Lei will be 2480 [about 18.65$ US] cause she has so many accessories. The figures will also include interchangeable "angry" and "happy" heads.

Here is another one that you may want to refer to the last Speedlines to get the 411 on what's been going on so far. Besides the Capcom Queens, Moby Dick is also showing off new early prototypes of the new Project Arms sets. Check these out:

No pictures of Takeshi Tomoe and White Rabbit yet. 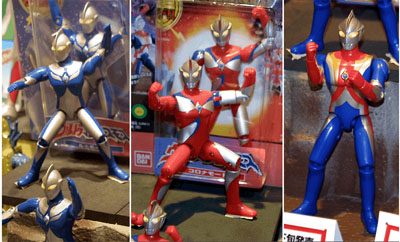 The new series of highly articulated Ultraman Cosmos figures are just now coming out in Japan. This series features Ultraman Cosmos Luna, Ultraman Cosmos Corona, and Ultraman Cosmos Eclipse. These figures have sound effects, when you hit a button on their back they make "battle noises." These are produced by Bandai, 17 cm tall and are 1300 yen each, Hobby Link Japan has them in stock right now. 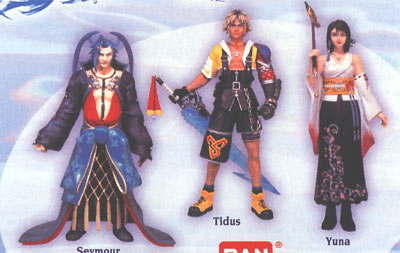 The new Bandai Final Fantasy X figures are just now starting to show up in Japan. Tidus, Yuna, and that slimy Maester Seymour are on the loose. These are 2000 yen [about 15$ US] except Seymour cause he's big and chock full of evil so he's 2500 yen [about 18.50$ US]. It also seems these will be coming to the US soon as well, but if you want them now HLJ has them in stock currently.

Bandai has released a set of Inu Yasha diorama candy toys. These feature the characters with some neat little background pieces. These are out right now and retail for 200 yen a piece.

Gamespot Japan put up some really nice photos from a recent toy show in Japan where Banpresto showed off some of their future items. Tons of really neat stuff here, Gundam, Lupin, Capcom Vs. SNK, Ultraman, new Kamen Rider Ryuhki, Ojamajo Doremi, New MSIA-like transformable Macross Valks, Cyborg 009, Hurricaneger, and more. It may be a little hard to navigate so here are the image pages: page 1, page 2, page 3, page 4.