A new line is on the horizon, Moby Dick will be making a new series of Action figures titled CAPCOM QUEENS. Come on, everyone knows the real driving force behind all the Capcom fighting games isn't losers shotoclones like Ryu and Ken, it's all the Girls! I mean who would you rather have a smelly Ryu figure or Chun Li? ...It's a no brainer. So to capitalize on the Capcom girls popularity Moby Dick will be releasing an all new, all girl line of Capcom Figures.

These figures will feature a new concept on Moby Dick's part, the "Dollgure" body, a combination of dolls and action figures. The body has a highly articulated internal skeleton, which will be covered in a new "Soft Skin" to allow movement. Companies like Volks and Dragon have done this technique with some of there 1/6th scale figures but Moby Dick is attempting to refine the process and make it work better, and it's at a much smaller scale. The figures will stand at 6 ˝ inches tall. No Pictures of the toys are available yet, but the line up is pictured above, it will consist of:

If the Line is successful, it might branch out into other Capcom Fighting games for assortments. How great would it be to finally get a June from Star Gladiators or Akira or Kyoko from Rival Schools, so keep your fingers crossed. These figures will retail for 1980 yen [about 15$] and are looking at a Spring Release.

Moby Dick will be making a new series of figures based on the Go Nagai's classic Cutey Honey. Cutey Honey is an Android who changes into different forms and personalities to adapt to her surroundings or to disguise herself. So of course you have to have toys of all those different forms, and that's what Moby Dick is delivering. The line up is...

Included with the release of each volume of figures will be hard to find variants. The variant for #1 will be Tarzan Honey, the Variant for #2 will be Ninja Honey, the variant for #3 will be Bronze Statue Honey, and the last variant will be a battle damaged Cutey Honey for #4. These figures are 18 cm tall and will retail for 1980 yen [about 15$ US]

Moby Dick will also be making a new series of action figures based on the Manga and Anime series PROJECT ARMS. In Project Arms the "human characters" control these large Technological monsters called ARMS, so the action figures will be 2-packs with one human character and one Arms, sort of like Kotobukiya's JoJo's Bizarre Adventures figures that feature the humans and the stands. Moby Dick will be combining their "Dollgures" and Real Shock Action figures for the line. The characters will be 7 inches tall with about 12 points of articulation and interchangeable heads, and "ARMS" arm gauntlets. While the ARMS monsters will be 9 inches tall and feature 20 points or more of articulation. The series will feature:

These figures sets will retail for 3400 yen [about 26$ US] and come out the winter of 2002. No pictures of the toys yet but check out a picture from the anime to get an idea of what's coming. 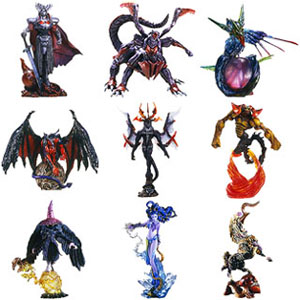 Furuta has released a series of Guardian Forces and Monsters from the various Final Fantasy Games. The series has Guardian Forces from FF7, FF8, FF9, and from the newly released FF10. There are nine different monsters to collect in all. These are randomly packed in unmarked boxes; they contain color versions, clear versions, and metallic versions. These are 300 yen [about 2.25$ US] a box and are out now.

Konami will be putting out a set of Metal Gear Solid 2 trading figures. These trading figures differ from the Mcfarlane action figures slightly because they're based more on the character design artwork, while the Mcfarlane figures are based on the 3D in Game character designs. The set of trading figures will include Solid Snake, Raiden, Revolver Ocelot, Olga, Otacon, Solidier, and Metal Gear Ray. There will also be some variants of the figures like Raiden with and without mask. These come out January 22nd and Gamespot Japan has pictures of them all. 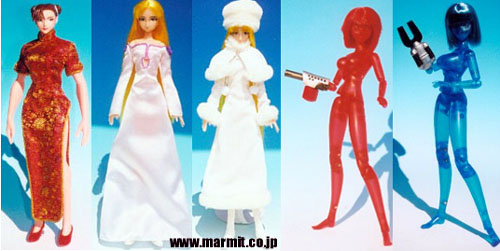 Here's a quick rundown on some future Marmit Doll releases. First up Marmit will be releasing a new Chun Li doll from Street Fighter. This doll will be a in a Chinese dress instead of Chun Li's usual battle costume, it comes in 3 different variant colors, 6800 yen [about 51$], comes out in March. Marmit will also be releasing some new Emeraldas, and Maetel Dolls, these are 6800 yen and come out this month. Marmit will also be continuing its Jewel Vogue series with the release of Rubii and Akua, these two retail for 3000 yen [about 22.50$ US] and will be out in March.

Yamato released some prototype shots of there upcoming Fastpack Macross Valkyries. You can check out the pictures by following the link to their front page - just click on the numerical links for all the pictures. 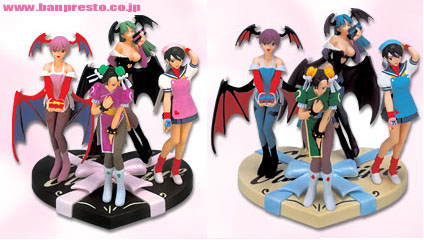 This month Banpresto will be releasing a new set of Capcom Girls holiday figures on the market. Previous sets had Summer and Christmas themes, while the newest set has a Valentines Day theme. The set contains Lilith, Morrigan, Sakura, and Chun Li, this set like the previous sets also has a "Player 2" color scheme too.

Some highlights from this month's Banpresto Prize items. A new set of frighteningly MSIA like Banpresto Macross mecha. These little beauties can Transform from into all 3 modes and have interchangeable hands and heads. They stand 12cm tall, and are out this month. Banpresto will also have some new large sized Kamen Rider Agito Figures as well as some smaller articulated Kamen Rider Agito figures, available this month.