Love Hina is one of the hottest manga and anime properties currently in Japan. The premise of the series is a guy named Keitaro made a promise to his childhood love that when they grew up they'd be together in Tokyo University. Fast Forward fifteen years later and unfortunately Keitaro not very bright and, forgot what the girls name was, and what she looked like, but he's still determined to be reunited with his true love at Tokyo University and keep his promise. To make matter worse since Keitaro is a dimbulb, he's already flunked the Tokyo University entrance exam twice and hasn't been able to get into the school. Discouraged by failure he ends up taking a job at the Hinata Inn, an all Girls Dormitory run by his Grandma. The dormitory is populated with a whole bunch beautiful ladies who may distract Keitaro from getting into Tokyo University and fulfilling his promise.

While the series initially ran there was not much in the terms of merchandise but there was a large rabid fanbase out there who needed to be appeased with small plastic representations of their favorite characters. So this past year there has been a swift downpour of Love Hina merchandise, Dolls, Plushes, Capsule Figures, Arcade Prizes, SD stuff, Keychains, Resin Kits, High End completed figures. Unfortunately no mass market action figures. There was a set of six limited edition figures released with the Love Hina DVDs in Japan, but there as you probably already guessed, on the pricey side. So what's an action figure fan to do?

A few months ago [when speedlines was down] there was an announcement that mass market action figures would be made. So Epoch's C-works division and Kaiyodo joined forces to form the SkyLuv Project to conquer the task of making Love Hina figures. Not just one... two companies are collaborating together to bring you what they hope to be the most precise, and beautiful Love Hina figures ever made. The SkyLuv Project is bragging that these are the first beautiful girl figures that can be played with, because of the articulation being added. 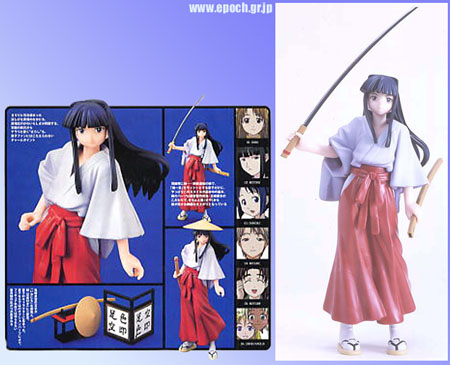 The First two releases of the SkyLuv Project have just come out over in Japan, Naru Narusegawa and Motoko Aoyama are now available. Naru is highly articulated and is dressed ready for the hot springs, her accessory is this Interesting rock base with this sort of abstract take on water surrounding her, it's meant to recreate the hot springs. Motoko's design didn't lend itself well to articulation so they focused more on a very nice sculpt. She comes with some interesting accessories like her Katana, and her Katana stand. Both girls are out now and cost 2980yen [about 23.50$ US]. Check out these images of the Carded figures: click on the links to see Naru and Motoko carded.

This is a sneak preview of Shinobu, who's the next figure in the line, she'll have laundry accessories wheee! 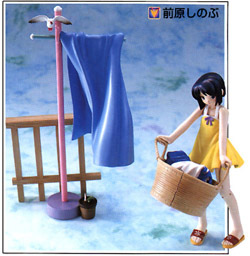 Want to know what's coming next? Well check out this list of figures SkyLuv's working on:

There is talk of a 7th figure but the details are still sketchy, it might be another version of Naru. C-works and Kaiyodo aren't completely finished yet either there is talk they'll be doing another project together. Love Hina comes to the US this February, Bandai Entertainment is going to be distributing the english versions of the DVD's.

Special thanks for some of the pictures goes out to Hobby Search who have just opened an english version of their site where US customers can order. Another thanks to sometimes guest columnist Darren Chia for some his Love Hina images. 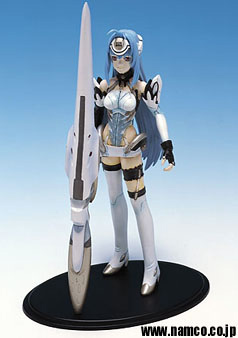 When the video game Xenogears came out for Playstation there was a whole lot of people who wanted figures, the only things that came out were a few hard to find Bandai kits of the mecha. Well seems they're planning ahead this time. Namco will release a premium box set version of the new epic Xenosaga RPG, that comes tricked out with a special book a keychain, some other stuff, but most importantly of all, a special edition ACTION FIGURE! Xenosaga's android chick KOS-MOS will be the figure included with the Xenosaga special edition. 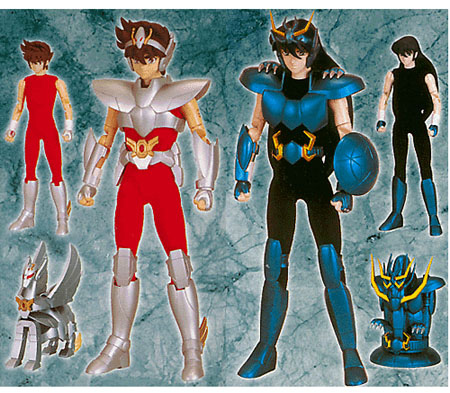 Banpresto will be offering an inexpensive alternative to those cool 12" Saint Seiya figures done by Ohtsuka Kikaku last year. Banpresto's doing these 15cm tall figures of Saint Seiya as well as Saint Shiryu. They both have removable armor and go for around 1500 yen each [about 12$ US]. HLJ has these in their new item section. 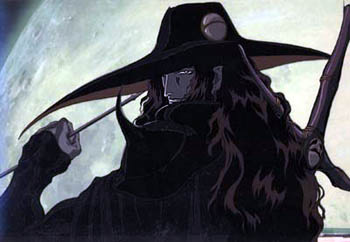 File this under oops, sorry it's not exactly late breaking news just forgot to put it up here till now. Check out this quote from the FAQ section from the Vampire Hunter D bloodlust website:

Is there going to be merchandise?
Yes, there will be merchandise available from Urban Vision, such as an action figure, T-shirts, posters, etc. and Diamond Distribution will be offering the exclusive Kotobukiya figure.

I guess we'll have to wait and see.

Some new items from Banpresto this month. The Lupin III coin bank, this one can suck up your coins with the little vacuum cleaner the characters are holding. A second assortment of Inu Yasha figures, these can be combined with the first series bases so you can have a big cohesive Inu Yasha display. And finally the latest assortment of the Ultraman hero assortment, these can be combined with the previous assortments bases as well, to make a big Ultraman display.