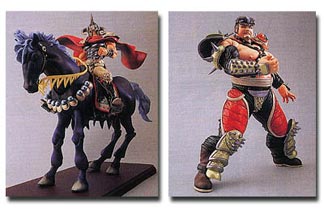 The Fist of the North Star (AKA Hokuto No Ken) has been one of Kaiyodo's longest running action figure lines. Based on the Classic manga and anime series about a dude named Kenshiro, who's trying to get back his abducted girlfriend in the apocalyptic, desolate, nuclear war ravaged land. The FOTNS toys have been quite popular, and Kaiyodo has served up a large variety of the cast, from main characters to goons. They also come with the usual variety of pain causing instruments and some other odd ball accessories, even interchangeable hands. FOTNS toys are about 7" tall and have a good amount of articulation. Some very impressive stuff has come out like the Raoh and Kokuoh-go Deluxe box set (the happy go lucky guy on the horse).

Those are nice, but now Kaiyodo's really setting the standard with the new Fist of the North Star 200X collection. Kenshiro and Raoh were featured in the RTM Spotlight awhile back, now there's even more coming. These 200X toys are absolutely incredible I can't stop saying enough good things about them. They are just so nicely designed. It also provides a new jumping on point for collectors cause their resculpting some main characters from FOTNS, but keeping them different from previous releases to keep people who have collected the line since it came out happy. 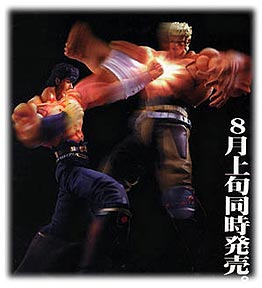 The articulation on these figures is crazy, it just flows so well. The way most toys are made today, it seems, the action figure (this excludes "doll" figures with cloth costumes) is sculpted to be in one certain pose, then the articulation is added. While thuis gives the figure movement, usually when its in any other position it loses balance or may looks odd. The interesting way Kaiyodo approaches articulation is to think bunch different poses they want the figure to be able to do, sometimes specifically taken from the source material. Then they engineer the figure and articulate it so it can specifically flow into those multiple poses, as well as general movement. I hope that didn't sound as confusing as I think it did, but seriously Kaiyodo's on the cutting edge when it comes to creative articulation. 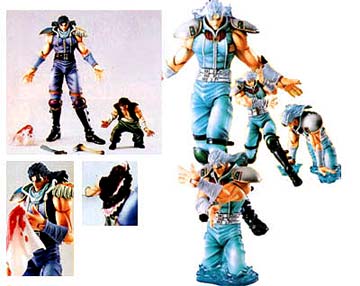 The accessories are keen as well. I mean, come on, look at the picture of Dark Rei he comes with a dwarf that can be sliced to pieces! Not to mention a bloody hanky for cleaning off goon blood, or stopping a nose bleed. The paint applications on these toys are also especially nice, it looks like they were all airbrushed by hand. They also come with an assortment of interchangeable heads, hands and arms. These are really top-notch toys that jump out at you, and could possibly kill you if you made fun of Rei's styling hockey hair. Check out these prototypes of new stuff coming up which includes a much needed Yuria in the mix. 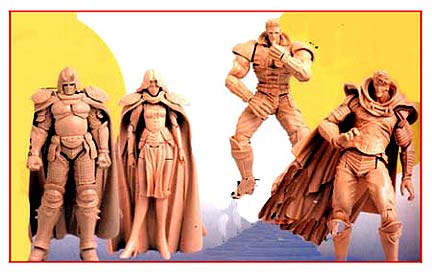 If your interested in getting the Fist of the North Star toys, Diamond has solicited them in Previews, so check with your local comic book shop, and you can also pre-order the FOTNS 200X toys at on-line retailers like JustBe Toys and Hobby Link Japan. 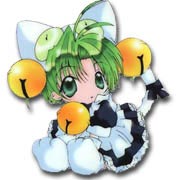 HA! I bet you thought You'd never see Di Gi Charat and Fist of the North Star in the same article! Now time to switch gears from the ultra violent to the ultra kawaii -nyo'. Di Gi Charat is an incredibly hilarious show that aired recently, and its already getting quite a cult following here in the U.S. Probably only a matter of time before it's domestically released.

Well, onto the merchandise-nyo'. Clayz has served up "completed model" renditions of the Di Gi Charat Trio: 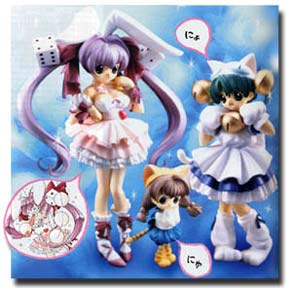 Dejiko (the girl with green hair, who's just obnoxiously cute cause she always says "nyo" at the end of her sentences. Doing this in real life is a great way to annoy people -nyo')

Puchiko (the girl with brown hair, who always ends her sentences in "nyu")

Rabbi~en~Rose (the pink haired girl, and Dejiko's arch-nemesis and has no idea why she wears Dice on her head)

These are boxed figures that are completed ready to go figures of the girls. Dejiko also comes with Gema, so you technically get an extra character thrown in. These are done in 1/6 scale and retail for about $65 each, very nicely done renditions of the girls. You can get these over at HLJ, or check around at conventions.

Coming soon on the Di Gi Charat front, Yujin will be releasing 3 to 5 inch toys of the girls. These will be boxed figures, which come with bases. The figures costumes are based on the shorts styles as well as the new Di Gi Charat summer special that just aired in Japan. As you can also see by the picture they come with some accessories too like Gema and the weird green penguin thing next to Rabbi~en~Rose. These retail around $8 each and are available for pre-order over at www.wizzywig.com