Hobby Links Japan scored a whole bunch of excellent pictures from a recent Bandai Toy Show, and you'll see a lot of these images scattered through the next couple of stories. As usual, HLJ has all these items available for pre-order in their pre-order sections.

Kamen Rider is quite an enduring franchise, every year they come up with a new series. Recently the new Kamen Rider Kuuga and Kamen Rider Agito series gave Kamen Rider a whole new level of popularity in Japan. The newest series is just coming out and many are wondering if Bandai can top the excellent work they did with the previous toy lines. Kamen Rider Ryuhki is the new series and Bandai's already waiting in the wings with a whole slew of new merchandise to lighten people's wallets

First up to bat are the new "Rider & Monster" series. These are fully articulated Kamen Riders that come with these spiffy robot monsters. These all come out this March the series contains the following sets: 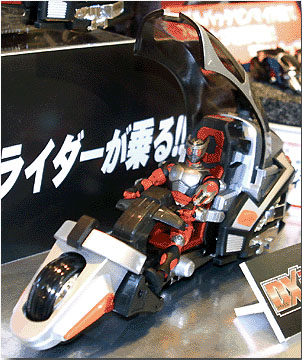 Next up is the new Kamen Rider Bike, it's sort of Tron looking, its called the RM DX Popynica Ride Shooter. This is made for use with the RM series, unfortunately no rider figure seems to be included. The new motorcycle comes out in March along with all the other RM figures, it retails for 3500 yen [about 26$ US]. 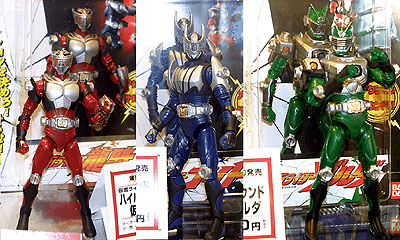 Finally a new set of deluxe sound figures is coming out too, these are similar to those Ultraman Cosmos figures in the last edition of speedlines. These Kamen Riders have "battle noises" and are fully articulated, they retail for 1300 yen [about 9.75$ US] and come out in March with the rest of the Ryuhki Avalanche. HLJ will have all these in stock, plus some other Kamen Rider Ryuhki merchandise you can pre-order.

Just like Kamen Rider, a new Sentai series comes out every year and Bandai's always there in the wings with plenty of new toys. The newest series is Hurricaneger, which features some similar elements to last years GaoRangers in that the Robots have an Animal theme. 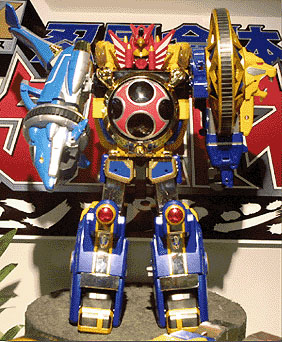 The new DX robot kicking off the Hurricanger line is the DX Senpuh-jin. This is what you get when you combine a hawk, a lion and a dolphin. This guy will set you back 6500 yen, [about 48.50$ US] is 26cm tall, and comes out in March. The new DX Senpuh-jin will also have power ups Animals that make new weapons which are sold separately. 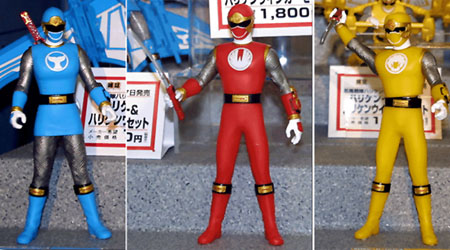 Bandai will also be releasing there standard assortment of vinyl figures, featuring Hurricane Blue, Hurricane Red, and Hurricane Yellow. These are 700 yen [about 5.25$ yen] each and come out in February.

You've got to have some sort of transportation right? And the motorcycles have been done to death so all the styling Hurricangers ride around in Gliders now, cause it's the hip thing for Hurricangers to do. These are pretty nifty little toys, the gliders come in three different flavors and an articulated Hurricanger is included in each set. These cost 1800 yen [about 14.50$ US] and come out this month. You guessed it, HLJ also has all the new Hurricanger toys for pre-order too. 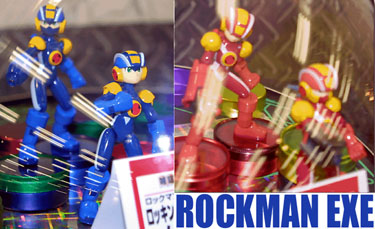 Just to Update what was mentioned in the last edition of speedlines about the new Rockman EXE toys. Bandai has some pictures now, these have 18 points of articulation, are 1200 yen [about 9$ US] each, and come out this May. Currently the line up consists of Rockman EXE normal style and Heat Guts Style. Hopefully they'll be venturing into some of the characters beyond Rockman in this line. HLJ has these in their pre-order section as well check it out here.

Just an update on the new 12" Onimusha figures by Dragon . These will cost 44.99 each, and they come out this Month. Dragon whipped up some new pages featuring some new galleries of pictures of the new figures check them out:

Konami has released a series of Trading Figures based on the Rave manga series. Like all trading figures these are randomly packed in unmarked boxes. These are out in Japan now and are 500 yen a box. HLJ has 'em in stock.

The second series of Trigun Capsule mini bust just came out at the recent 2002 winter Wonderfest over in Japan was the first place to get them. Trigun creator Yasuhiro Nightow's website has a nice picture of the new series right here. These are extremely high quality, K&M makes the best capsule figures around. These retail 200 yen each [about 1.50$]. 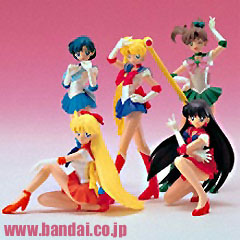 A new set of Sailor Moon Gashapon is coming out in honor of Sailor Moon's tenth anniversary. Bandai will be making a set of high quality HGIF gashapon, and these come out this month. It contains all the inner senshi plus a secret figure [okay it's dark lady]. These are 200 yen each [about 1.50$ US]