Da' Blue Bomber is back

Rockman [AKA MegaMan] Fans rejoice, New figures!! Well, sort of. Yujin is releasing a set of Rockman Dash 2 [AKA MegaMan Legends 2] capsule figures. This set will consist of 6 figures: Tron, Roll, Yuna, Serra, Kobun with Rockman Parts A and a Kobun with Rockman parts B. When you get both sets of Rockman parts you can assemble them to make a FULLY ARTICULATED Rockman Dash toy. The Rockman figure when completed will also have the parts to make his helmeted head or Rockman without his helmet. The two Kobun's are supposed to have slight variations as well. As for the ladies, well, they just stand around and look pretty. These should be around "4-ish" inches tall. This set has just come out in Japan and should be arriving in specialty import shops here shortly.

Those wonderful folks at Bandai are going to be adding a new addition to the Die-Cast Kado Senshi Gundam action figure line. The Zeta Gundam is the next figure in the line up. These are easily the best Gundam action figures on the market. With the addition of the Zeta Gundam figure, Bandai will top themselves yet again. This figure will be FULLY transformable int its wave rider mode. Remember, it's 1/144 scale so it makes a great addition to all those 1/144 kits ya've got lying around. The folks at Just Be Toys scored some prototype shots of the newest addition, which can be seen here.

SIC of Turkey yet? 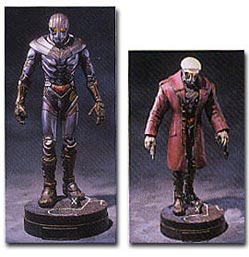 Or just SIC of all the bad puns in here?

The latest addition to Bandai's extremely detailed SIC line is Robot Keiji from Robot Police K. It should be hitting shops just about now.

It had to happen. If ever there was a series that was just "plush friendly", it'd have to be Di Gi Charat. It looks like someone else noticed, as well so start looking for Di Gi Charat plushies nyo'.

Yamato's "twilight magic works" has been cranking out a lot of interesting "familiar" 12-inch figures. The latest of which are the new Rolling 20's toys. "John" and "Lewis" come fashioned in styling 20's-era mobster clothes, as well as coming equipped with an accurate mobster arsenal. These guys are slated for a late November/early December release.

Kaiyodo Heats Up Winter With Virtual On 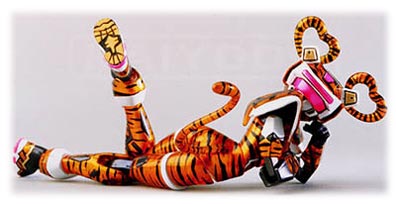 Two of biggest selling types of toys in Japan are "Hot Chicks" and "Mecha"...so why not combine the two into HOT CHICK MECHA! That's right folks Kaiyodo is delivering a new Fei Yen "The Tiglet" Limited Christmas Edition (above). Man oh man! I have to have that under my tree this year. This new Fei Yen sports a ton of articulation like the others, and lots of dandy detail. You just gotta see Fei Yen's photo shoot on Kaiyodo's site these pics are awesome, and really show off the figures incredible articulation.

In other Virtual On news, be on the look out for the new Temjin Winter limited repaint (left). I know, I know...no one cares about poor ol' Temjin. You guys are probably still ogling the Fei Yen pics ;p

"A second anime line will happen, that much is true. But what figures it will contain is another matter altogether."

Who's it going to be in the line up? I have no clue. But, in a bout of totally unprofessional abuse of my tiny amount of power here at Speedlines, I'm going to whine! Come on McFarlane make some new Iria toys!

Well, that's it for this week, folks. Come back next week for more from Speedlines!