I promise I won’t refer to myself as LL Cool Ray...except on mondays. Well, I’m back now and want to get caught up, so to speak, with the news, so some of these stories might be a little old to RTM Buzz Boarders, but the "masses" (all 7 people that read Speedlines) still need to know. Don’t click back just yet theirs also some new news mixed in this week as well.

Kaiyodo just keeps on going, the next Trigun figure in the Trigun line has been confirmed and the lucky girl now being immortalized in plasticky goodness is MERYL. Meryl’s one of the insurance ladies that follows Vash around to keep tabs and try to prevent Property Damage that always seems to happen when the humanoid typhoon known as Vash walks in to town. Prototype shots of the figure have been floating around the net, as soon as I can get a good picture you’ll see it up here. The figure looks to have lots of articulation reminiscent of Kaiyodo’s Virtua-On: Fei-Yen figure. Meryl will also have her trade mark concealed pistols built into the toy as well. 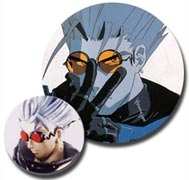 In other Trigun news, Kaiyodo will be releasing its spooky new Sinister Black Vash The Stampede repaint which can be seen right here. The "sinister" version of Vash sports very groovy red shades, and a blade on the back of his Gun. Sinister Black Vash comes out in Japan at the end of November. Seeing as how this repaint first popped up at the San Diego Comic Con last July at the Diamond Comic Distributors table, I’m taking a wild guess it will be in previews soon as well.

Okay, how many of you saw Endless Waltz last Friday on Toonami? Now, how many of you want toys? Well, we all saw it coming a mile away, but Endless Waltz-based action figures will be coming soon from Bandai, which should make many folks very happy. You can check out some better pictures of these bad boys on the Gundam Official Home page under the merchandise section. No word yet if there will be any Japanese or Hong Kong MSIA versions like with the Gundam Wing action figures. 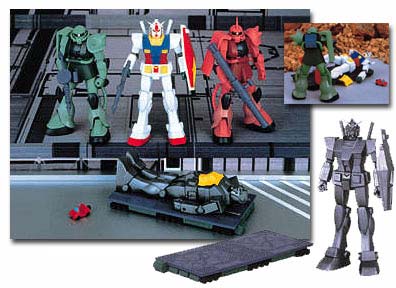 To follow up the popular Zeta Gundam Action Gokins, Banpresto will be relasing a new set based on the original 0079 Gundam series. This set will have the RX-78-2, the RX-78-3, Zaku II, and Char’s Zaku. The Action Gokins are Mobile Suit in Action scaled prize item fully poseable action figures with die-cast parts, and accessories. 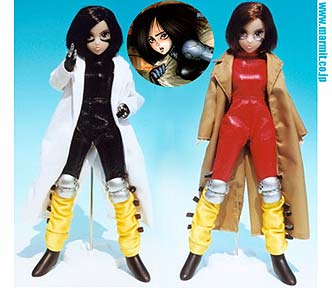 Justbetoys.com has a very cool photo of an upcoming prototype shot of a FULL ACTION Super Imaginative Chogokin: Kikaider. Before the SIC line had just amazing detail, but now it looks like Bandai will be kicking it up notch by making it chock full of articulation to boot. Let’s hope Bandai pumps out a full action Haikaider as well. Just Be is reporting this guy will be 9 inches tall and they’ll probably have it available to order on there store when it comes out.

Kaiyodo will be releasing the latest edition to the Fist of the North Star 200X line Ryuga. Crammed with lots of detail, articulation, and 7 essential vitamins to get your day started right Ryuga was offered in...er..last months issue of Previews. Sorry. Like I said, I’m catching up this week ^_^ 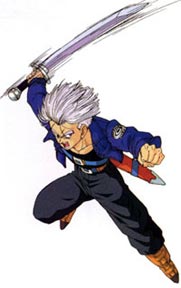 Isn’t that an oxymoron?

Well, at any rate, McFarlane Toy's new 3-D Animation from Japan toys are out now and I have to admit being surprised by them very nice toys at a relatively inexpensive price, compared to what most anime toy fans are used to paying for thier toys. Here’s to hoping the line continues.

Irwin also continues to amaze with its latest series of DRAGONBALL Z toys. The official DragonBall site has posted early prototype images of the upcoming toys, you can check it out by clicking here. DBZ fans should also be on the prowl for DBZ Series 16 (Krillin, Dende, Chi Chi, King Kai and Trunks) and the new Blasting Energy 2 action figures , they have just been released.