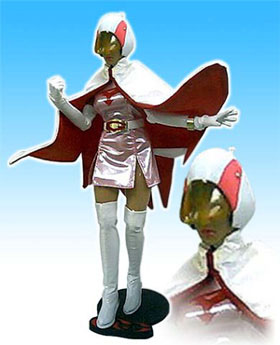 Takara's Cool Girl Line has just unveiled it's latest releases, a certain "swan girl." It's Jun from Gatchaman, AKA Princess from Battle of the Planets, AKA Agatha June from G-force, AKA Kelly from Eagle Riders AKA Snoopy from Charlie Br.. er scratch that last one, got a little carried away. Whatever you know her as she's now available as a Cool Girl Doll from Takara. Takara's Cool Girl line is a series of 12" female action figures, that are mostly of generic made up characters, but Takara has slipped in a few licensed female's into the line like Cutey Honey, and now Jun. Jun is fully poseable and comes with a real cloth outfit. A few liberties have been taken with the outfit but it's still fairly accurate. She's also based on a realistic interpretation of the character instead of the animated version. Cool Girl: Gatchaman G-3 Jun comes out in April 2002 and will retail for 6800 yen. 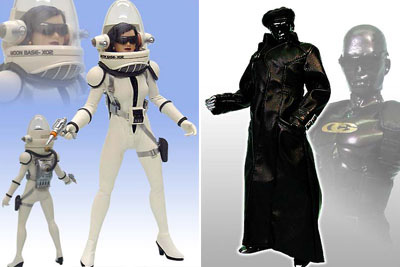 Takara's E-Hobby's unveiling other new Cool Girls are on the way as well, the new Cool Girl Astronaut and the Cool Girl X-borg: X-01 Guard. I don't know about you, but that X-01 Guard, is a weird looking chick if you ask me. The CG astronaut is 7800 yen, and the X-01 Guard is 9800 yen, both also come out in April.

Some new Trigun news on the horizon. Bandai will be doing a new set of Capsule figures for Trigun, unlike the K&M Trigun mini bust, these will be full body incarnations of the Trigun crew. The set will feature Vash the Stampede, Nicholas D. Wolfwood, Millions Knives, and the Infamous Black Cat. No pictures available yet, but Vash and Wolfwood have interchangeable regular and sunglasses heads, and the black cat comes with an elaborate display base. These come out in February 2002. 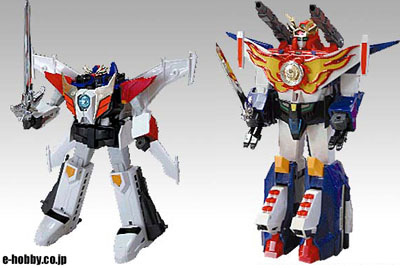 Right on the heels of Takara's Transformers re-issues comes Takara's newest re-issue venture... re-issuing the BRAVE Series Robots. The Brave Series robots were what Takara made after the Transformers franchise, and they incorporate a more super robot feel to them, as well as combining and transforming elements. The most Famous robot from the Brave Series is Gao Gai Gar, who's had plenty of new toys lately. Takara's new Re-Issues are Earth Union: Da-Gan X, and Armed Union: Fai-Bird, from the second and third Brave series. Both of these Brave robots are 6980 yen and will be re-issued in February.

Based on the Clamp Manga series, K&M [Kaiyodo & Movic] are serving up some Chobits capsule figures. This series has a bunch of versions of Chii, as well as a figure of Sumomo in the set. K&M really set themselves apart in the capsule market, by having some of the best sculpting and paint apps on capsule figures in the industry. There quality is astounding... but they only release a handful of items opposed to how other capsule companies dump huge amounts of new things each month. So take advantage of these, this set comes out in January and are 200 yen a capsule.

Marmit's newest doll will be from their Saibran Girl series, the translucent Jewel Vogue Silvia, with chainsaw arm. Don't worry, I have no idea what this is either, but it looked weird so I felt like putting it up. It's 27 centimeters tall, and features a translucent body, with some silver paint highlights. It's 3000 yen and comes out in January. 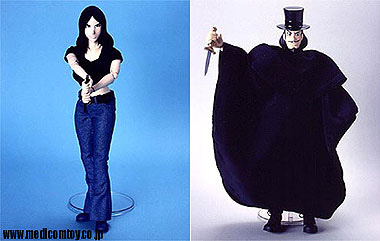 Just about every month Medicom releases some new figures to their Lupin the 3rd: Stylish collection. These are 12" fully poseable dolls with replica costumes from Lupin, this line has been continuing for awhile and these are the latest releases. Coming in February 2002 is Lupin the 2nd and Fujinami Ginko. Lupin the 2nd uses the Stylish collection body which has 26 points of articulation and Fujinami uses the "Sin" style female body which has 34 points of articulation. These retail 6800 yen each in Japan.

This month Banpresto will continue to capitalize on the immense success of the Kamen Rider franchise by releasing some new prize items like the newest batch of super deformed keychains, and these giant 28 centimeter SD dolls, and the DX Kamen Rider figure assortment.