The Next Perfect Grade

If your any sort of a Gundam Model fan you probably already know this but... the next Perfect Grade Gundam kit is the RX-178 Gundam Mark II. Words been going around awhile, and it was showcased at a recent hobby convention in Japan. Now Bandai has finally released its "official" information on the new behemoth.

Perfect what? If you're new to the Gundam scene you may be asking yourself what all this means. The Perfect Grade is the highest caliber of Bandai plastic Model Kits, these are Giant 12-ish Inch kits Bandai releases once a year, as its pinnacle of model perfection. They are 1/60 scale, insane amounts of intricate working detail, and some of the most articulated things on the planet, virtually everything moves on these. Perfection doesn't come cheap either... these are usually in the 100$ + price range.

The MK-II is from the 1985 Zeta Gundam TV series. The Perfect Grade Kit, like the majority of Gundam kits is a plastic snap together kit, there's a massive amount of pieces so be prepared to donate about 12 hours of your time. Some of the snazzy features in this are, the functioning "endo-skeleton," opening and closing block hatches, and a head camera inside the cockpit light up using light emitting diodes. The RX-178 Gundam MK-II comes out at the end of November and retails for 15000 yen [about 124$ US] in Japan. HLJ has it available in their pre-order section, and has some pics of it from the recent convention mentioned above.

AHH! What happened to Marky Mark?

Er... I mean Mark Walberg [don't want to get regulated]. Kubricks fans should be pretty pleased with Medicom's latest offering of Kubricks based on the Planet of the Apes movie. This set includes Leo, Daena, Pericles, and the explorer pod. These are scheduled to come out in March, over in Japan at 2800 yen, but Previews will probably carry the set too.

Kaiyodo's giving a new angle to their Armored Trooper Votoms series. Now they feature a better all around appearance, and a more of a focus on action articulation. There was a blurb from Diamond on the figure in the RTM News section a few days ago that will give you more information. Kaiyodo just put up some very impressive pictures of the Mecha in action. Click these links to see to see the galleries:

Banpresto's offering some new prize items this month... well they offer new prize items every month so don't get too excited. [From right to left] The new Ultra Heroes assortment featuring the Heroes of Ultraman. 5 in this first set, they feature connectable bases. Banpresto plans on doing more of these, so you can add more to the base. Next up a set based on the old Space Adventure Cobra series, this figure collection features five characters from Space Adventure Cobra. Banpresto will also deliver its monthly dose of Gundam, this time featuring some more slightly more obscure Gundam mecha design like the, full armor and the prototype Gundam as well as a high mobility Zaku. 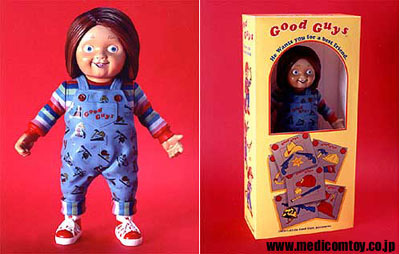 Medicom latest offering to their Pre Assembled Collection will be a figure of Chucky, based on Child's Play 2. Chucky stands about 9 inches tall, and has articulation at the shoulders, wrist, and ankles, 4800 yen. The most interesting part about it is he comes in box based on the box design from the Child's Play movie.

In December, Bandai will be releasing two small diorama figures based on famous scenes from One Piece. These feature Monkey D. Luffy and will retail for about 780 yen. Thanks to HLJ for the image and of course these are in HLJ's pre-order section.

Capitalizing on the holiday season Banpresto will be releasing some new Mascot figures this month. A set based on One Piece and a set based on Ojamajo Doremi, each set contains the cast all bundled up and ready for winter.