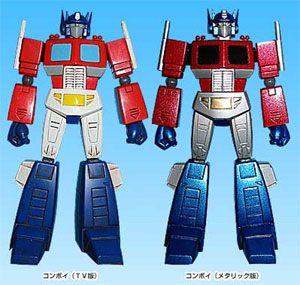 You gotta love the blatant copying done in the Japanese toy market, like Kubricks for example. Medicom had a great thing going, with these ginchy little playmobile-esque creation. Pretty soon everyone and their grandma is making "block figures" too. Now the same thing seems to be happening to Bandai. Their little "In Action" line format is now being copied by other companies. First Yujin with their "Master action" series, and now it looks as if Takara will be going the same route with Transformers.

Takara will be making this as a "Mega" version of their S.C.F. stuff. The figure will be 110mm tall, and features some articulation, and comes with some interchangeable hands, and accessories. Obviously they are going for the "cartoon accurate" look so this figure does not transform. Takara has employed a cheap marketing trick by making this a set of figures, regular Optimus, and the turtle wax Optimus variant. So you got to shell out 3960 yen [about 32$ US] to get these two. The Mega Supreme Commander Convoy AKA Optimus Prime set will be out this March.

In November, Yujin will be releasing its Guilty Gear X capsule figure collection. GGX is a 2D fighting game produced by Arc System Works, some say that rivals the unofficial gods of 2D fighting games over at Capcom. The Capsule assortment will consist of 6 figures; each capsule is 200 yen in Japan. Yujin has also commented that if this assortment does well, they will most likely do a second assortment of guilty gear characters. 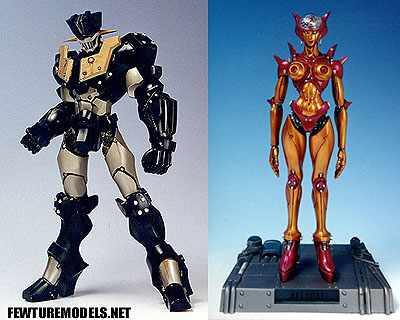 The new figure will be, according to Fewture, 11 inches tall, and boast a wide variety of articulations, comes with a custom base and a removable pilot figure that's stored inside Mazinger. Also coming out will be the new Aphrodite Mega Action Figure. She'll be about the same size as Mazinger, with her own custom base, and she just wouldn't be complete without her patented breast missiles, which are included with the figure. These are supposed to come out sometime in November and have a SRP of 34.99.

Déjŕ vu... didn't I just cover Mazinger figures? Well even more figures of everyone's shiny metal friend are on the horizon. Bandai's next installment of the SOC diecast figure line... will be Mazinger. No, no, no, Bandai's braintrust didn't finally loose their minds, this Mazinger will be based on the new Mazinkaizer OAV design. Just Be Toys has some pics of the prototype from a hobby magazine in their rumor section.

Also in the wings after OAV Mazinger will be the OAV version of Aphrodite, who will also have... breast missiles. [Sorry for the repetitive bad joke. I just wanted to see how many times I could slip the phrase breast missiles into column this week]. A full spread on the Aphrodite SOC prototype is in this months Dengenki Hobby.

Yujin's going to be releasing a bunch of new girl figures this month so for convience sake lets just lump them all together. From left to right...

-Nanako, from Amazing Nurse Nanako is the latest figure to be added to Yujin's SRDX series. This figure will retail for 1500 yen [about 12$ US]

-A bunch o' handmaid May's. Yujin's just releasing a big set of these, they come in different color outfits, and a variety of facial expressions. These are 2480 yen [about 20$ US] 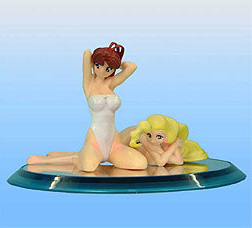 -SRDX Sunrise Heroin selection. Utsugi Mikoto & Swan White from Gao Gai Gar, have been done before in the SRDX series, but now they're in swimsuits, with a reflective mirror like base. 4000 yen [about 32$ US]

He said he'd be back 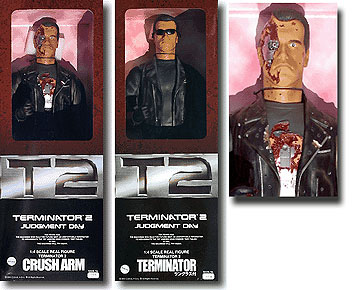 Aoshima has just released two large completed figures based on Terminator 2: Judgment Day. There are two version of the terminator to chose from, the crush arm terminator who's got lots of battle damage, or the clean sunglass version. These retail for 18800 yen each which is about 154$ US. Another special thanks to HLJ for the images and they do have this item in stock.

Can never have enough valks... 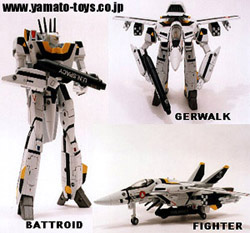 Yamato's VF-1A was just officially released in Japan, and before all the commotion has settled, Yamato's already prepping for their next big release. So just a reminder the 1/60 VF-1S Focker Transformable valk will be out this February, at 7800 yen [about 64$ US]. 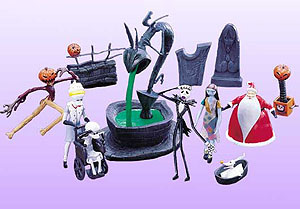 After all these years, The Nightmare Before Christmas merchandise is still coming out continuously, although it does get an obvious push during the holiday season. Yujin will be releasing a new series of trading figures, that not only feature the characters but some of the cool background elements as well like fountains and tombstones. 500 yen each, and out this month.