By Darren Chia
The Boot-Scootin' Boogie! 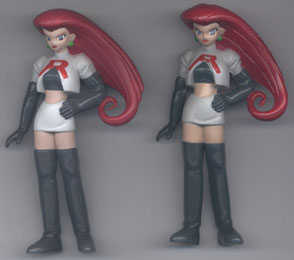 Are you seeing trouble? And making it double? Which is the real Jessie, and who is the other lovely doppelganger?

Welcome to the world of bootlegs! Ripoffs! Copies! Call them whatever you want, the fact is there are many of these things out there impersonating your favorite Japanese toys. Yes, some are easy enough to spot (Green and purple Pikachus riding on bicycles, for example). But there are pretty good facsimiles out there, so it's time to learn how to tell the real from the fakes. Jessie the facts, ma'am (groan).

The first thing you should look for is, of course, the imprint, or the copyright information. All official toys should have this somewhere. Let's have a look.

Hmm, it does say "Made in China". But that isn't good enough.

There we go! It's got the licensor (Nintendo, Gamefreak etc), the year, and the company (Tomy or Hasbro, depending on which country you're in). Well, this case is closed. Too easy? Let's look at some others. 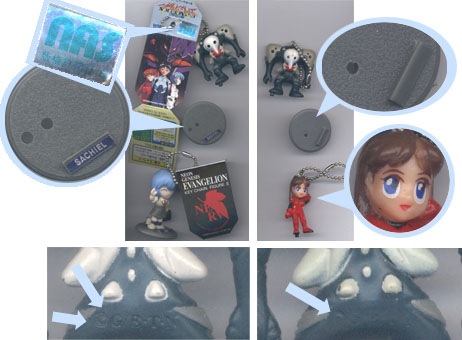 See these Evangelion keychains on eBay often? But how many of them are Dummy systems? The originals are easy enough to tell (left). Each keychain will include an official tag, with Sega's company information, and a foil NAS sticker. Another obvious clue is the figure's stand. The official stand has got 2 pegholes, and a decal featuring the name of the figure. The boogey, as you can see, only has one hole, and no name. If you're getting a loose piece with neither stand nor tag, a simple way to make sure is the paint job. The fakes have rather messy applications, with badly printed details or sloppy blotches. On the original Sachiel's butt (left), you can also see the official markings very clearly. The bootleg still has some markings, but it's covered by thick paint. Yes! Even fakes have copyrights imprinted on them sometimes, so watch out! Getting more complicated, isn't it?

Usually nearly all arcade prize items will have some kind of tag or catalog, so if your figure has one too, it's probably authentic. Even gumballs will come with their own FULL-COLOR mini-pamphlet.

Gashapon isn't the only thing that can be copied. Sometimes bootleggers get inventive and actually make their own toys. Or they take existing ones from elsewhere and package them on cards like "real" action figures. Since they can't be examined, look at the card. Here's that coveted "Ranma Saotome" figure: 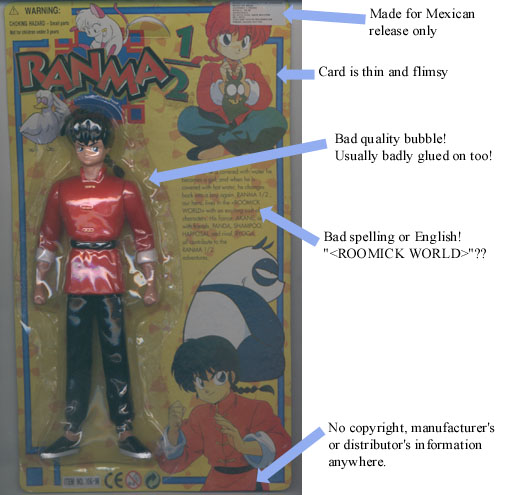 Cool? Maybe. But, still a fraud. The most obvious is of course the lack of any licensing information. An official card would have to have information like "Copyright TV Tokyo/Rumiko Takahashi 19XX" and so on. Generally, beware of anything Mexican, Taiwanese or Thai. Those three are the toy bootleg capitals of the world.

Speaking of Taiwan, the latest craze seems to be copy-casting resin kits. While the casting seems pretty OK, the painting looks like it's done by a 10 year old. Not only that, it's literally sometimes held together by blu-tak! Peel off some paint, and an arm may fall off revealing the blu-tak underneath! Next time you want to fork over $200 for that Neon Genesis Evangelion "fully painted resin kit", better take a closer look first! These should go for only $20 or so. Even major stores have been known to fall for the "authenticity" of these!

On to Rotocasts! With these it's a lot more difficult to tell. Some rotocasts are official products, others are copies, and others still are actually illegally produced from scratch, but are so nicely done they look real. Take these Ranma 1/2 figures. No markings whatsoever. I'm still not sure if they are official. What I know is that there are bootleg copies of what may be bootlegs themselves!

Tip #4: The Keychain.
-Rotocasts are large (3"+), so are not usually used as keyholders. If it has one sticking out of its head, it's a likely bootleg. Same for those with "Springies" stuck to the bottom.

So, you think you are the master now, eh? Well, here're a few toys. See if you can tell which ones are bootlegs just by looking at them. You might be surprised. Answers in an upcoming installment of RTM's SPEEDLINES!

Disclaimer: Neither RTM nor the author is in anyway selling or encouraging the purchase of illegally produced items. This information has been publicized to provide consumers with greater knowledge of said items. Please don't shut us down, you big mean companies, you.