One Piece is a story about Pirates, that has snowballed into a huge merchandising phenomenon. Every month, Bandai and Banpresto release a plethora of new One Piece stuff: SD figures, claw catcher prizes, keychains, gashapon, diorama's, puzzles, pencils, toilet paper, figurines. Massive amounts of stuff... But no "official" action figures. Banpresto did some poseable figures, but they weren't "traditional action figures," but now finally Bandai Delivers "official" One Piece action figures! Fully poseable, highly detailed five-inch action figures available now in Japan. Click on the picture above for a larger more detailed image.

- Monkey D. Ruffy:
On a quest to become the greatest pirate in the world Monkey D. comes with his trade mark rubberman stretchy arm, that you can switch with articulated regular arms.

- Sanji:
The ladies man comes packed with plenty of articulation and an interchangeable head. The figure also has the ability to do Sanji's patented kick.

- Roronoah Zoro:
The swordsman comes with his three swords, lots of articulation and interchangeable heads.

This is the first wave of figures, and seeing how successful one piece is over in Japan, this might not be the last of the figures. These just came out in Japan and retail for 1680 yen [about 14$ US]. I'd like to thank HLJ for the images and they do happen to have these in stock...

While we're still talking about One Piece, check out Banpresto's new One Piece X-mas assortment.

Toys R Us Japan revealed their new Exclusive: the Mass Production VF-1A from the "Macross: Do you remember love" movie. It's basically a repaint of the VF-1A. Macross World scored another great advanced pictorial and review on the piece.

All right, I know, these aren't exactly brand new news, but I haven't seen any sites mention them yet, and this column was out of commission when they came out. Anyway, Volks has done some interesting Saiyuki action figures. These are "1/8th scale" and feature some basic articulation, most of the effort lies in the sculpt of the figures. Volks has produced Goku, Sanzo, Hakkai, Goyjo, all come with accessories, and really phenomenal looking paint applications, and these came out in August and retail for 2080 yen each. 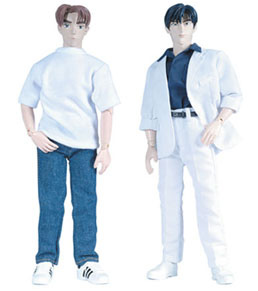 Ya' know, these just totally slipped under my radar, there's a bunch of Initial D prize item type things, and model kits of the cars they race, but Dragon did two 12-inch figures based on the Initial D third stage movie. These came out last summer, and are limited to the Hong Kong region only, and dragon has sold out of their supply so they're a little hard to get now. Remember Folks, Speedlines is committed to bringing you the absolute newest news ;-p 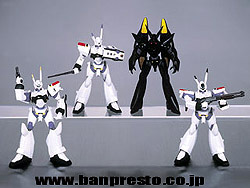 Banpresto's new Patlabor figures are out this month, these are the ones that are supposedly some sort of bastard cousin to Bandai's "in action" line. They have neck swivel, shoulder swivels, ball jointed elbows, waist, and knee swivel joints. Not quite, in action quality, but they do look kinda cool with your in action toy displays. Makes you wonder if Bandai's prepping to do an official "in action" Patlabor figure.

Medicom released some interesting trading figures last summer, based on paranormal creatures. These Trading figures based on some eyewitness sketches are called the mysterious museum collection; they retail for about 280 yen each. Medicom will be doing a new exclusive Series Two that goes on sale at the Douburudan Museum in January for 300 yen each.

Bandai's official Gundam channel, updated with a new commercial for the Radio Controlled Zaku II. You can view it here. There's a big difference in quality, don't even bother trying 8.53KB one, go with the 1.22MB one.

On a side not that's not totally toy related, check out the commercial for the Zeonic Front Video Game. Click on the one at the top left, if you're a real Gundam fan, it'll crack you up. 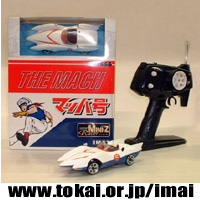 Imai will be producing a "mini-Z Racer" of the Mach 5, this is a small radio controlled car that will retail for about 16800 yen [about 139$ US] and it will be released in November.

Just a heads up, these just started showing up in stores this past week, Escaflowne, Big O, Outlaw Star, all sets have a SRP of 14.99. The Big O seems to be the little Gem of the first assortment. Bandai will be doing more of these, another Escaflowne, and Big-O set is on the way as well, as Cowboy Bebop and Pilot Candidate.

Takara will be releasing some more Microman Devilman figures, just in time for Halloween. E-hobby has a nice picture of the set. These retail for 1500 yen each, and come out this month.

I know you've probably seen the new Bruce Lee figures from Art Asylum before, but www.actionfigureexpress.com has a really ginchy catalogue shot of the upcoming figures assortment.