Welcome back to Speedlines. We are once again opening the flood gates of the very coolest in Japanese toys that will be available in the near future. Start saving your pennies, kids, cool stuff abounds!

Gundam: You Ain’t Seen Nothin Yet

Gundam G-Saviour will be getting kit figure treatment this December. G-Saviour is the new live action Gundam Special, which uses CGI to bring the Mobile Suits to life. The G-Saviour kits that will be coming out are going to be 1/144 scale, and judging by the $13 price tag, it looks like they will be High Grade kits. No pictures of the actual kits are available yet, but to get a good idea of what may be coming here are some pictures of G-Saviour 1/72 scratch built production models they used for the modeling in the actual Special. Pictured here are the G-Saviour Terrain [flight mode] and the G2-Saviour. 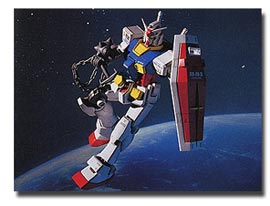 Some rather large Gundam news is being passed around lately. If you thought Gundam was big in the U.S. now, you ain’t seen nothin yet.

It’s been known that Bandai has been working to get the original Gundam 0079 TV series on Cartoon Network's Toonami block for awhile now. However, Fantasticon recently interviewed Sean Akins, the head dude of Toonami, and Akins hints at not only 0079, but some of the other One Year War Gundam story arc’s coming, as well, like the 08th MS Team. He refers to having a whole lot of Gundam coming in the future.

Bandai is insistent that 0079 be shown so that they can air all the sequels to 0079 that make up a huge chunk of the Gundam Universe. None of this is totally 100% confirmed and locked down yet, but it seems very likely now and that's great news for the ever-growing legions of Gundam fans. 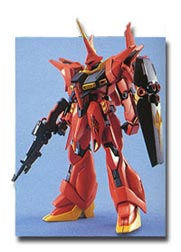 From a Toy perspective this news has the potential to be HUGE! Gundam Wing, is just a tiny little drop in the bucket in the grand scheme of all thing Gundam. The big winner for the franchise has always been the Universal Century stuff. Introducing the Universal Century into the U.S. would mean the possibility of a huge tsunami of Gundam product in the U.S. like the Mobile Suit in Action line, The High Grade Universal Century kits, and the Master Grade kits. Heck, maybe even the Kado Senshi Chogokin Gundam toys could possibly end up at a Toys R Us near you. Of course, none of this is confirmed, just my speculation, but I think it’s a pretty safe bet Bandai will release the appropriate merchandise here when the various Gundam series eventually air on Cartoon Network. 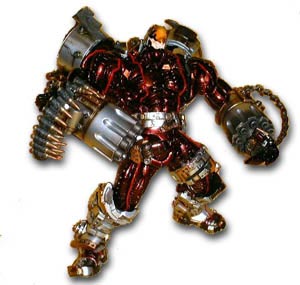 Check out Kaiyodo’s latest offering based on the Trigun anime: Monev the Gale. Produced by the Toy Tribe division of Kaiyodo, which specializes specifically in the Trigun toys, this whopping, fully-articulated giant is ready to fight Vash with his full arsenal. The main body of Monev features the metallic coating style that Kaiyodo used on the metallic Evangelion variants. You can see more pictures of Monev on Nightow Yasuhiro’s (the creator of Trigun) groovy website, in the Toy Tribe section. 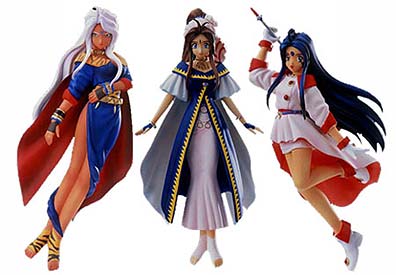 Yellow Submarine will be releasing Ah! My Goddess figures this November, featuring all three sisters: Urd, Belldandy and Skuld. These are magnificently detailed figures that stand about 6 inches tall and come with a display stand that allows them to "levitate". These will retail for about $20 each in Japan.

The freaky fighters continue to be produced. ART FX’s latest addition to the JoJo "Static and Dynamic" action figure two-packs is Mohamed Abdur and his stand Magicians Red. You can see him here, he will be available in December and retail for about $44 in Japan.

It looks like there will be further re-releases of the Takara Transformer G1 line, according to news coming out of JustBe Toys: "Takara is re-producing 6 more original transformer next year. These 6 figures were chosen by customers who voted 10 of their favorite figures."

Interesting. I'm not sure if that’s counting the recent announcements of Hot Rod and Ultra Magnus re-releases or not. We’ll try to keep you posted on what develops.

The Next SOUL OF CHOGOKIN Toy 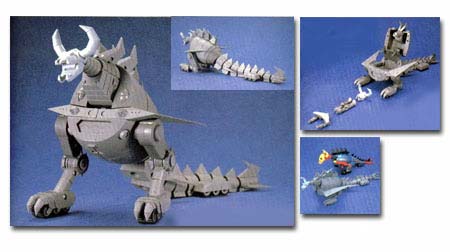 Bandai’s latest addition to the ever mighty Soul of Chogokin (SOC) line is Daikumaru (GX-05) also referred to as the Gaiking Space Dragon. These shots are of the prototype of the forthcoming totally rocked out die-cast toy. Not only will you get a fantastic toy with die-cast construction, top notch detail, loads of accessories, and lots of articulation, you also get a lil’ mini transforming Gaiking to go with it. Bandai seems determined to out do themselves with every new SOC release, so stay tuned for completed shots of this bad boy. Daikumaru should retail for around $140 in Japan and is set for release sometime in 2001. 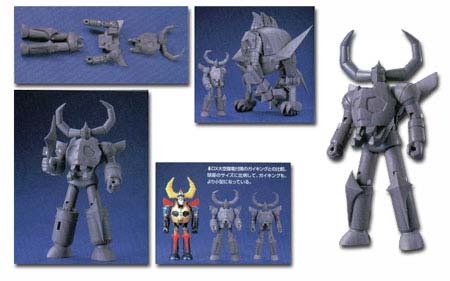 That's it for now. See ya next week!