Moby Dick has unveiled their latest Resident Evil action figures, and is changing the method by which they are releasing them. Previously, they were all going to be released in 2-packs, but now all the new releases past the Carlos and Nemesis 2-pack will be individually blister carded action figures.

Here's a break down on what coming soon:

-No.05 Claire Redfield (Leather Jacket Ver)
Articulated at the neck, shoulders, elbows, waist, groin, and ankle rotation. Claire will be able to store her gun in her holster.
Available in December

-No.08 TYRANT (Resident Evil 2) AKA Mr. X
Articulated at the shoulders, elbows, knees, neck, wrists and groin.
Available in December

-No.09 Claire Redfield
Articulated at the neck, shoulders, ponytail, wrists, elbows, waist, and ankle rotation. Knife on her shoulder is removable.
Available in December

-No.11 Hunk
Articulated at the neck, shoulders, wrists, elbows, waist, groin, and ankles. Comes with detachable mask.
Available in January 2001

-No.12 IVY
Comes with a bunch of bendible tentacles
Available in January 2001 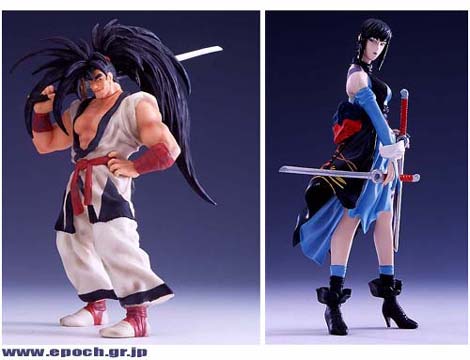 Last July at the San Diego Comic Con RTM brought you pictures of the Samurai Spirits (AKA Samurai Showdown) prototypes from Epoch. Now here are the finished products of Haomuru, Shiki, Hatori Hanzo and Nakoruru. Based on the video game from SNK, each figure will come with interchangeable parts like heads and arms, as well as a gorgeous sculpt. These will retail for about $23 in Japan and are available for pre-order at Hobby Link Japan. The Samurai Spirits toys will be released in November. 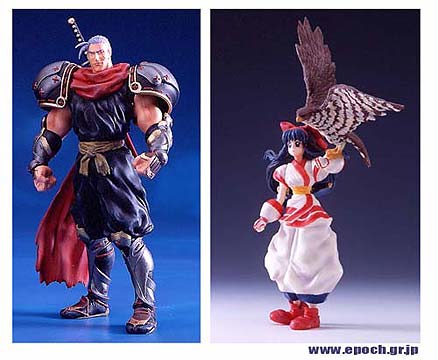 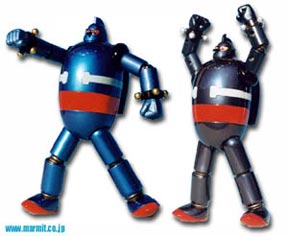 Marmit's new die-cast Tetsujin-28 (AKA Gigantor) toy is out now. Giving the Soft Garage die-cast T-28 toy from last year some competition. This fully articulated action figure retails for $71 over in Japan. Tetsujin stands a smidgen under 10 inches tall, and comes in 3 paint variants chronicling the different styles of T-28.

You probably saw it coming as soon as they announced the Sazabi. You can't very well have Char's Sazabi and not have arch-rival, Amuro Ray, with his RX-93 Nu Gundam to go with it. So now the newest 1/100 Master Grade Bandai's kicking down our way is the RX-93 Nu Gundam from: Mobile Suit Gundam, Char's Counter Attack. Paratrick Models has the latest pictures of the Nu Gundam which can be seen here and here. The latest Master Grade will cost $45 and be available at the end of the year.