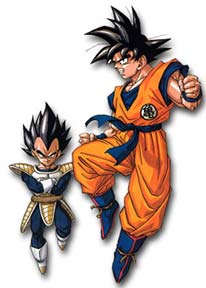 Greetings one and all, and welcome to the big dandy DragonBall Toy Blow Out! No, no, nothing's on sale, but I just couldn't think of a better name. This week were going to look at a comprehensive guide to DragonBall toys of the past, present, and future. Thanks to Irwin Toy DBZ, is now currently booming in the United States toy wise, so there are a lot of new collectors wondering what exactly is out there. In this fancy Extra Large edition of Speedlines, your going to see some of the rarest DBZ toys out there, as well as some of the fantastic all-new Irwin stuff. 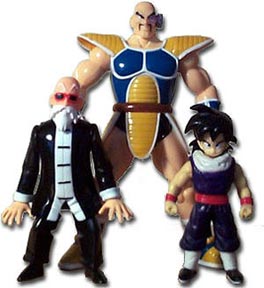 DragonBall Z, currently airing in the U.S. on Cartoon Network, is the second part of the DragonBall series trilogy. DragonBall was originally a humor Manga series created by Akira Toriyama, then was turned into an Anime which ran from 1986-1989. Then to signify the more action based emphasis that the series was taking they started a new series DragonBall Z, which takes place where DB left off, DBZ aired from 1989 to 1996. The final series DragonBall GT, GT was not headed by creator Akira Toriyama; it ran from 1996 to 1997. In 1996 DIC aired an edited version of the first DragonBall series in the US, and it failed.

Then, a little later, Funimation started to release an edited version of DragonBall Z in the U.S. where it ran for 2 seasons on Saturday mornings. However, due to very bad time-slots in most markets (it was on at 5:30 am where I live) it was also canceled. Then, Cartoon Network started up their Toonami block and showed DragonBall Z at a decent time, making the series much more accessible to a wider audience, and it quickly became the #1 rated show for it's time slot. Since it's premiere on Toonami its success has increased exponentially, just like Son Gokou's power level!

Irwin now has an extremely hot property on their hands. The first DragonBall toys they released were so hot, even toys of characters that had not been seen on American TV were selling out. DragonBall is a toyline that's both kid and collector friendly. I'm still amazed when I walk into my Local TRU, and see kids performing a "Kame-Hame-Ha!" (Turtle Destruction Blast) Or "Special Beam Cannon" (AKA Makkankosappo). Come on, who here ever thought they'd see DBZ toys at Burger King?! So sit back and get used to it, Cartoon Network ordered the other 150+ episodes left in the series, so that gives Irwin a lot of time to add to a great line, as the company has just started releasing their own original DBZ figures.

Celebrating the success of DragonBall Z, Speedlines is proud to present a look at the wide variety of DBZ toys that have been available.For you're viewing pleasure the toys have been divided up into three sections. Just click on a link below to make your selection:

-DragonBall Toys from around the World

New episodes of DBZ are currently airing on Cartoon Network, every weekday at 5PM. If you're interested in getting some DragonBall merchandise on-line ActionAce is the source, highly recommended. You can also check the official DragonBall Store at DBZstore.com, The DBZ Specialty Store and Image Anime.