This week's Speedlines takes a look a several new products in the land of the Rising Sun. There's a little something here for everyone, so enjoy! 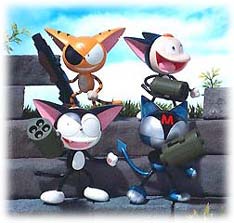 Funny looking cats with really big guns is a combination almost as great peanut butter and jelly. Cyborg Kuro-Chan is a series that airs on TV Tokyo on Saturday mornings, based on the manga series that runs in Bon Bon. The series is about an ordinary house cat Kuro-Chan who is abducted by an evil scientist and turned into a cyborg. Kuro-Chan escapes and uses his newfound powers to fight evil and protect his family.

The Cyborg Kuro-Chan toys are produced by Tomy and stand about 3-˝ inches tall. The action figures retail for about $4.50 each in Japan. These toys just have the most hilarious facial expressions, you can't help but warm up to these psychotic looking kitties. They have "bendy" figure construction plus weapons that shoot projectiles.

Tomy is offering much more than just the action figures. They also make board games, card sets, gashapon, and deluxe battle tank figures. all these Kuro-Chan items can be viewed on Tomy's Kuro-Chan web-page. Unfortunately not many places carry Kuro-Chan merchandise www.cybertoyz.com and www.wizzywig.com are some of the few places online that do. But, if you bug your favorite import shop to carry Kuro-Chan they'll may cave in. So, good luck!

Transformers Generation ONE is coming back with a vengeance! 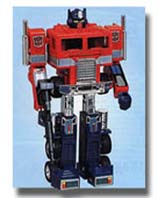 ...at least in Japan. With Tranformers: Car Robots having a very Generation 1 "look" to them, and Takara even going so far as to re-issue original G1 Transformers, including the recent re-issue of the Grand-Daddy of all Transformers: OPTIMUS PRIME it looks like 2000 is the beginning of the return of G1. That should come as exciting news to the legions of Transformers fans. 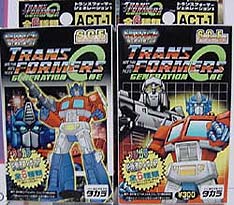 Now Takara is kicking it up another notch with its release of new G1 PVC toys! These figures, reminiscent of the old Action Masters, look exactly like their t.v. show counterparts. They have some modest joints at the neck and a couple on the arms and stand about 3 to 4 inches tall. On top of all that, THEY'RE CHEAP!!! These guys only cost about $2.75 each in Japan. Of course, you can expect to pay a little more to get your hands on them in the US, but still a great deal. I'd like to thank Zaras's Toy's and Games for the info and help with these images. You can check out even more pictures of these in Zaras's Jaf-Con and Wonder Festival reports.

So far the Transformer: G1 PVC line up consists of

There will also be Crystal Clear versions of each character.

On top of all that, Takara has also started a new Transformers Generation One website.

Could this be the just the beginning?

Palisades Marketing is doing some pretty cool stuff this year that should appeal to all the otakus out there. Their web page has updated with some new control art for the Ninja Scroll statues. Palisades also has some new Pioneer-related merchandise sure to please fans, such as the Serial Experiments Lain Luchbox, and Lain vinyl figure in the works. Another cool item featured is the Vash the Stampede mini-bust. Palisades is presently working on a Ryoko mini-bust as well, so keep an eye out for these ginchy collectibles in the future.