Gundam.... is big. The mecha are big, the franchise is big, and now thanks to the huge success of Gundam Wing on the Cartoon Network's Toonami programming block, Gundam is poised to take over the US. Gundam started in 1979, surprisingly during the series first run it wasn't really that successful and was canned. Then it aired in reruns for awhile till it was compressed into movie format with some new footage and became a hit. Bandai has capitalized on this by releasing an enormous amount of merchandise with it. Since then many Gundam sequels, and side stories, novels, video games have been spawned making Gundam a very long lasting franchise.

Gundam was the very first "Mecha" series, and it was the first to take a more "realistic" look at war. There were not only big robots beating the bolts out of each other, but there was a lot of politics involved in the stories as well. It also always kept the consequences of war in scope too, which is one of the traits that's endeared it to fans. 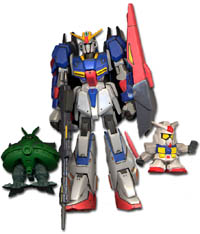 Gundam's continuity is based on a big time line known as the "Universal Century" (UC) time line. Most UC Gundam stories chronicle the exploits of different cast of characters at different points of time in the many different wars that have occurred in the Gundam universe. There is also the "alternate universe" stories that have no place in UC continuity...mainly cause the UC universe was getting too crowded. Gundam Wing is an example of an alternate universe series.

With the popularity of Gundam Wing there are now a ton of new Gundam fans out there, and the point of this Deluxe Speedlines will be to give a proper introduction into all the Gundam merchandise out there, because it all can be a little confusing and intimidating to newcomers. This isn't everything, if I was going to list all the Gundam merchandise ever, I'd probably be typing for 2 months straight, this will serve as a guide to answer many of the questions that are often voiced on RTM's Toy Buzz forum, and to highlight the many divisions of Gundam merchandise available out there. So with all that said and done, lets get started.

Section 1: Gundam Kit figures
-Here you'll find out about the backbone of the Gundam franchise.

Section 2: Gundam Kit divisions
-Jump on in here to learn about all the different scales and grade divisions that crazy Gundam fans babble about.

Section 3: Gundam Kit finishing techniques
-Learn to make your Gundams... Even better! with tips for novices and vets.

Section 4: Gundam Action Figures
-Come take a gander at some cool toys, and get the straight dope on what's out and what's coming soon.

Section 5: Gundam Gashapon and other Miscellaneous items
-take a look at all this cool (and inexpensive) Gundam toy shwag

Anime Village is currently releasing the many different Gundam series in the US, check your local anime retailers for copies of Gundam, or watch Gundam Wing on Cartoon Network.