Transformers: Car Robots is the latest installment in the long-running, and amazingly popular Transformer action figures from Takara. For so long Tranformer fans have wanted the line to go back to it's roots and have vehicle-based Transformers again, and Takara has finally delivered, and in a big way! With what's out now and what's on the way it looks like Takara's got a big hit on their hands.

The new Car Robots line consists of.... cars, like you couldn't already figure that out from the title. The Deluxe Cars have amazing detail in car mode. Rubber tires, chrome rims and other parts really give the vehicles a great look. Their robot modes are also pretty cool as well, especially the three brothers, Wild Ride, Mach Alert and Speed Breaker (shown above, left), as they each have very different robot modes that reflect their personality. 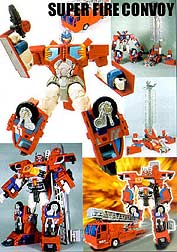 Then, there is SUPER FIRE CONVOY (right), hailed by many to be the greatest Transformer toy ever. Super Fire Convoy is a giant fire truck, that transforms into his first stage robot mode: Fire Convoy, and a base just like good ol' Optimus Prime. Fire Convoy can also be combined with the base to create Super Fire Convoy. This mean machine also has lights and sounds too, so you can scare the pets! 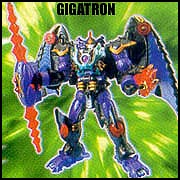 Well, Super Fire Convoy needs someone to fight, and that guy is Gigatron (left). Gigatron is the new Destronger baddy for Car Robots. The keen deal with this particular Transformer is he has 6 -yes, you read that right, s..i...x...six! - different transformation modes: Robot, Car, Jet, Giant Hand of Doom (my personal favorite), Bat, and a two headed Dragon.

Any self-respecting bad guy needs a posse of minions to go with him, in the Car Robots line Gigatron has some Hasbro Transmetal 2 repaints backing him up.

What does the future hold for Car Robots? Well right now JRX (below) is just hitting stores, he's a new Train Robot Combiner. Their will also be a team of all new Constructobots that can combine to form Build King (below). The trick with these guys is they can combine in different combinations to create a different look. God Magnus (below) is another all new Car Robot that will be hitting shelves, the picture of him is seen here is just the prototype. God Magnus will also be able to combine with Super Fire Convoy to create an Ultra Fire Convoy.

Takara will also be doing some re-paints and re-releases this year. Look for Battle Convoy, an "evil twin" of sorts that's a repainted TF Generation 2 Laser Prime. Indy Heat and Wrecker Hook are some TF Machine Wars repaints that will be coming out soon along with Battle Gaia a Bruticus repaint. In the Fall the three car brothers will be released again but repainted in different colors. Also be on the look out for a re-release of the original G1 OPTIMUS PRIME! Its rumored Optimus has a role in some upcoming episodes of the Car Robots anime.

If your interested in getting car robots toys check out Image Anime or Action Ace for starters.

I'd like to thank Image Anime for the help with pictures of the upcoming releases.