It's all about Macross, baby! 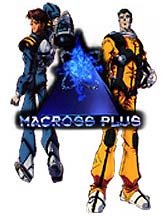 Huh? What's a Macross? Well, for those who don't keep schooled up on this type of stuff, the original anime series Super Dimensional Fortress Macross may be more familiar to you under the name that it was shown in the U.S. back in the 1980's: ROBOTECH: The Macross Saga

Robotech enjoyed quite a bit of success back in the day, spawning a healthy amount of merchandise including the old Matchbox toy line, and a minor resurfacing tied-in to Playmates Toys Exo-Squad line, and several comic book series. The show was poorly translated from the original... but I wont get into that.

What I am going to get into is Toycom's new Macross Plus Valkyries!

The Toycom Valks are based on "Macross Plus", one of the many Macross sequels, which chronicles a tale of two test pilots fighting over the gal they love. These are the first new transformable diecast Valkyries in a long time. Toycom will be releasing them all this summer. The latest reports have said the YF-19 will be released starting in June, followed by the YF-21 in July, with August seeing the release of the VF-11.

Each of these figures will be fully transformable into all 3 modes: Battroid (robot mode), Gerwalk (jet with legs down) and Fighter mode (regular old jet). They will also have diecast parts, just like the original Valkyries, and will retail around 45$. That may seem like a lot, at first, but that's actually a pretty nifty price when you consider that most Japanese "diecast" toys start at 50$ and up (way up). Toycom's Macross Plus Valkyries will be available at most specialty shops, and the plethora of on-line dealers.

Toycom has been enthusiastic about this line, and they have teased collectors by saying if the first wave is successful they might be interested in doing the mother of all Valkyries....the VF-1!! That makes me wanna scream like a school girl at an N*sync concert! I will name my first born son Toycom if they do a VF-1 strike Valkyrie. If you don't know what I'm babbling about, the VF-1 is the "original" Valkyrie featured in the original Macross series (aka Robotech) . So support TOYCOM! Buy 2 of each to give them gobs of money so they will do a VF-1.. no, I haven't been bribed by Toycom, I just really want a VF-1, without having to pay $1000 for the original.

If you want to see more cool pictures of the Toycom Valks, and see an amazing, envy-inducing original Valkyrie collection check out The Valkyrie Exchange. You can also place pre-orders for the new Toycom Valks at that site. Macross Plus is available on VHS and DVD courtesy of Manga Entertainment.