Forgive my bad singing, I just had the opening from the old show stuck in my head. Well, this week I'm going to be hop scotching through the wonderful world of Bandai's Rockman line, known by us folk in the states as Megaman, star of a very popular, and long-running, Capcom video game franchise. The Rockman line is not a brand spanking new, but with Megaman X5 coming out for the Sony Playstation, Bandai might make some new figures to go with it. I've always felt the Blue Bomber hasn't gotten props in the toy community he rightly deserves...yet. 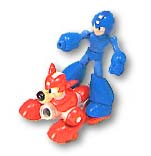 The Bandai toy line covers various characters from Rockman, and Rock's bigger "tougher cousin" in the future Rockman X. Some of the figures in the line are known as Iron Busters, and these have swank little extra arm cannons that shoot out little metal balls at high speed. These are guaranteed to at least shoot one of your eyes out.

The figures have to be assembled, but they are snap-together. It's no biggie really, as they take me only about 15 to 30 minutes to assemble. They require no glue or paint, so there's no need to worry about that. The instructions are illustrated, and you don't need to know any Japanese to assemble them. Its just a matter of matching numbers. With the Mega Armor series you snap on all the armor to a "mega frame". For the most part, all the pieces on these guys are interchangeable, so you can mix them up and make your own creations in addition to the basic characters.

Since the Rockman character have big feet, it also makes them really sturdy and easy to place in some poses that most toys would fall over from. The figures have wonderful detailing, and the likeness are great, which sets this line apart from previous Rockman lines. One more really jive feature about this line, is some of the boxes have awesome pics of the toys set up in dioramas. These boxes are definitely worth saving, for that alone. 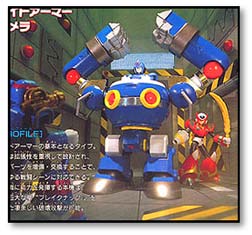 Perhaps Bandai's crowning achievement in the line is the awesome ultimate accessory for the Rockman X series: the ROBOT RIDE ARMOR! The Robot Ride Armor has two convertible modes from the game, a standard mode and the flight type mode. The spare parts also convert into a hover ship. The Ride Armor, can also shoot out little plastic discs. Unfortunately the Ride Armor is very, very, very hard to find, but on the upside all the other figures are pretty easy to locate.

Rockman toys usually retail between 13$ to 18$ bucks a pop. Most specialty shops carry them. For a good archive of all Rockman merchandise you might wanna check out Megalopolis. Some good places to buy Rockman toys online are actionace.com, imageanime and explosiontoys.com