Hellsing's a ginchy Manga and Anime series that's quickly earning a cult following in Japan since it started. Besides Japan it's also developing quite the fanbase in the US as well, and as soon as Pioneer officially releases the series in the US, it'll probably be a heavy hitter sales wise. So, of course they have to make some action figures to rob us poor toy addicted saps of our hard-earned cash.

Back at Toyfair 2002, Toycom unveiled the new Alucard [that's Dracula backward] action figure from Hellsing. The figure is 6 inches tall and has a great sculpt capturing the "real" vampire in all his glory, and comes with some interchangeable hands. In addition to Alucard, Toycom will also be releasing a figure of Victoria Celes, she's another member of Hellsing.

These toys are made of... LOVE AND PEACE!

Yasuhiro Nightow, the creator of Trigun, is a lover of action figures. It really shows the way he's handled Trigun and all the great Trigun toys that have come out as a result of his toy collecting passion. The newest Trigun figure is a 12" version of Vash with real fabric clothes, and a highly articulated 12" body. The Kaiyodo Vash was based directly on Yasuhiro Nightow's designs, the McFarlane Vash was based on some Trigun promotional art, but the new Alpha 12" Vash is the very first Vash action figure to be based directly on the Trigun anime. This toy features a wide variety of extras, Vash's gun can be opened, Vash's transforming gun arm is also worked in, the coat has wires in it so you can pose it, and of course the Kuroneko [unlucky black cat] will be included as well. Vash retails for 5800 yen [45$ US] in Japan and comes out this April over there, but Toycom is importing him to the US early second quarter, and you can get him for a much cheaper SRP of 34.99. 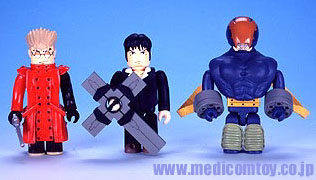 Since were on the subject of Trigun, might as well go into a few other odds and ends. Medicom is releasing a set of Trigun Kubricks this summer. This set includes Vash the Stampede, Nicholas D. Wolfwood and Monev the Gale. Vash comes with a gun arm attachment, Wolfwood comes with Punisher, Monev has a removable mask, and the set features a diorama graphic and crystal base. These come out this June, and retail for 2480 yen [about 19$ US] in Japan, but don't worry about it cause Previews is importing them for cheap in the US.

A new set of Trigun Gashapon from Bandai came out in February, the set features Kuroneko, Vash, Wolfwood, and Knives. The set has variant sunglasses heads for Vash and Wolfwood as well a variant base for Kuroneko. These are out now and are 200 yen [about 1.50$ US] a capsule in Japan. 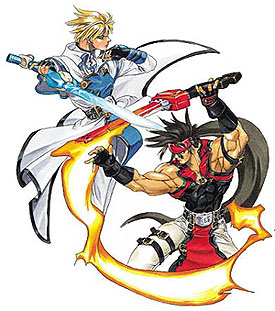 Guilty Gear X is a new generation 2D fighting game done by Sammy, it's kind of known among US gamers, but it's getting really popular in Japan, with a new installment of the game on the way. Epoch's C-Works division who have done many fighting game action figures in the past like Tekken, DOA2, Samurai Showdown, Soul Caliber, is now adding Guilty Gear X to the expanding list. C-works has already done an assortment of Guilty Gear high end completed figures and resin kits, and those look great, hopefully the figures will turn out just as nice. No word yet on who's in the assortment, but these will retail for 3500 yen [about 27$ US] and they come out this June in Japan. 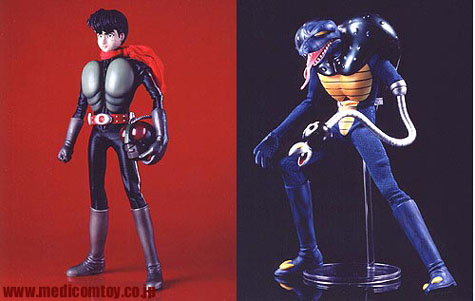 This June, Medicom will be releasing some new additions to its "Stylish Collection": Kamen Rider 2 and Cobra Man. These differ from most of Medicom's Kamen Rider toys in that they're based on the Kamen Rider Manga designs as opposed to the live action TV show. Kamen Rider 2 has 26 points of articulation, and some interchangeable parts including Red Boots and Gloves. Cobra Man also has 26 points of articulation and features an opening and closing mouth and movable tongue plus a Cobra machine gun tip opening-and-closing gimmick. These are 7800 yen [about 60.25$ US] each and come out this June. 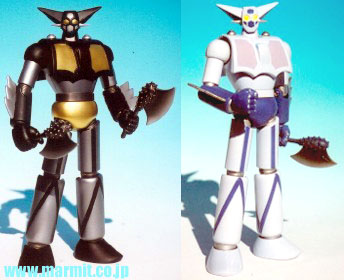 Marmit will be releasing some repaints of its "Dynamic Action Figure" Getter Robo-1. They'll be making a black repaint and a training colors Getter Robo. These are 20cm tall, fully poseable and come with the Getter Tomahawks. They cost 3800 yen [about 29.35$ US] and will have a limited release in May.

The Monsters are on the loose

The Final Fantasy X Monster assortment from Kotobukiya has just been released in Japan. This is a series of the various monsters you fight in the Game, although Anima technically is a Guardian Force - I guess they needed him to flesh out the monster assortment. These are non-scale 6-ish inch figures because if they were to scale you probably couldn't afford them.

Here are some highlights from this month's Gashapon offerings from Bandai. Bandai will be releasing a set of Chogokin Gashapon, these are small cheap reproductions of classic Chogokin toys. Each one comes with an action feature, these are 300 yen each. A new series of One Piece wall relief's capsules are on the way, these feature small magnets so you can slap them on the fridge. Lastly, Bandai will do a set of Ojamajo Doremi mini capsule plushes. These also have magnets so you can use them for the fridge as well.

Sega's released a set of new Rei Ayanami based on some Gainax computer game who's name I'm spacing out on, and am to tired to look up at the moment. Since Rei's soooo boring to be around in Evangelion this game tries to spice up her usual withdrawn personality. In March Sega will have a new set of Love Hina UFO catchers, these are Naru and Mutsume in bathing towels.

Banpresto is releasing a series of Berserk Super Deformed Keychains... yes you heard right Berserk. Making SD Berserk stuff is just so wrong on so many levels, it makes them hard to pass up. Banpresto will also be releasing a series of DX Super Robots, these are 33cm tall and feature Combattler V and Reideen. Lastly, Banpresto is making a 1/144 scale RX-78 Gundam toy, it's only articulated on the top half unfortunately.