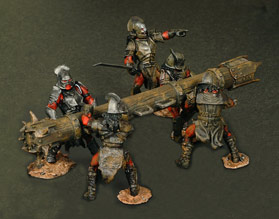 (Click on any of the images on this page to see much larger versions.)

New York, New York (January, 2003) - Recreating large battle scenes from your favorite movies can be a daunting task if you're working with full-sized action figures and play sets. Play Along, Inc. has designed their upcoming The Lord of the Rings™ toy line based on New Line Cinema's movie trilogy, with this in mind, creating a 3" scale so that fans can realistically recreate epic conflicts with fully populated armies. Additionally, figures will be sold in 3-packs, which will make completing teams of good and evil characters easier. These meticulously sculpted warriors, weapons, and environments, are beautifully detailed, yet on a small enough scale for collectors to create comprehensive, museum quality displays.

"We at Play Along understand what fans and action figure enthusiasts want - to recreate the awe-inspiring battle scenes from The Lord of the Rings trilogy accurately and quickly," said Jay Foreman, President of Play Along. "Traditionally, to buy enough characters to reenact these scenes, involving hundreds of warriors, can take up a huge amount of time, space, and money," said Foreman. "We used computers to sculpt the most spectacular battle scenes without sacrificing any character likeness or environment details due to conventional restrictions." 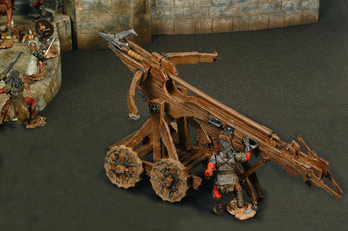 The line, which will make its debut at Toy Fair with the help of one of its' on-screen stars, will include action figures, accessories and playset environments. Focusing on high-level detail and collectibility, Play Along intends to capture the strength and depth of the imaginative characters and environments. 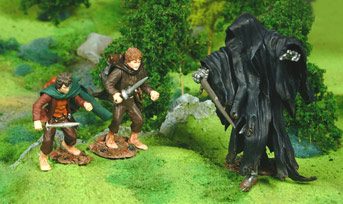 "The Lord Of The Rings trilogy is considered by millions throughout the world to be the greatest adventure ever told. We are inspired by the intensity and emotion of this tale, and are very excited about being a part of this epic journey," Foreman continued. "Like Star Wars, the epic has many fascinating participants and places. Consumers want to re-create the captivating world of The Lord Of The Rings™, and we intend to give them the power to do just that," said Foreman. 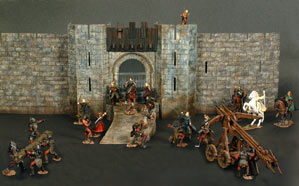 The first set of highly decorated, articulated figures and accessories, which includes over 60 magical characters and five mystical environments, will hit retailers in summer '03 to coincide with the DVD release of the second movie, The Two Towers™. Additional collections of characters and settings will be released every three months, the next in fall '03 in conjunction with the holiday theatrical release of the final film in the trilogy, Return of the Kings.

"We are excited to bring the world of Lord of the Rings to consumers, and are determined to make all action figures and accessories just as magical for fans as the film," said Rick Watkins, Senior VP of Product Development. 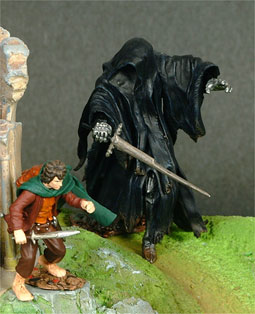 Key characters from the trilogy include all of the various races of Middle-Earth: Hobbits, Rohan, Gondorian soldiers, Wizards, Orcs, Uruk Hai, Elves Vs Dwarves. Environments will include Helm's Deep, Bridge at Khazad-Dum, and Orthanc Chambers with Balcony. The subsequent collections of new environments will include Isengard with Treebeard, Cirith Ungol Pass with Shelob, and Mount Doom.

About Play Along, Inc.

Play Along Inc. designs, develops, markets and manufacturers high profile entertainment brands and characters created with the intention of delivering quality, value and satisfaction to consumers. Play Along acquires the latest in licenses and creates cutting edge toys and feature products based on of the hottest movies, music and entertainment personalities and brands, most notably its Britney Spears doll collection. For more information and to view the product line, go to www.playalongtoys.com.

Founded in 1967, New Line Cinema is among the entertainment industry's leading independent producer and distributor of theatrical motion pictures. New Line licenses its films to ancillary markets, including cable and broadcast television, as well as to international venues. The company, which is a subsidiary of AOL Time Warner Inc., operates several divisions including in-house theatrical distribution, marketing, home video, television, acquisitions, production, licensing and merchandising units. More information about New Line Cinema can be obtained at www.newline.com.

New Line Cinema's highly-anticipated second installment of the epic adventure, The Lord of the Rings: The Two Towers, has generated more than $261 million domestically and $560 million worldwide in its first two weeks. For more information about The Lord of the Rings, please go to www.lordoftherings.net.