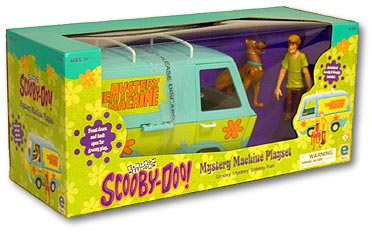 For many of us who grew up watching the classic Scooby-Doo, Where Are You? cartoon when it originally aired on CBS back in 1969 the very idea of toys based on the classic Hanna-Barbera cartoon is just too cool to pass up. Scooby-related merchandise was few and far between back then. 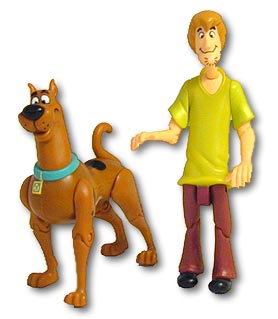 Though the property is now over 30 years old, it continues to be extremely popular with fans young and old thanks to the considerable exposure the series has gotten as a prominent fixture on the Cartoon Network.

The action figures on their own merit the RTM Spotlight, but the Mystery Machine - such an iconic image in the annals of animation history - puts this over the top!

While the regular action figure line features larger (about 8") action figures with traditional 5-point articulation, the smaller figures included with this playset feature much more articulation, and on Shaggy especially a better likeness to his cartoon counterpart. 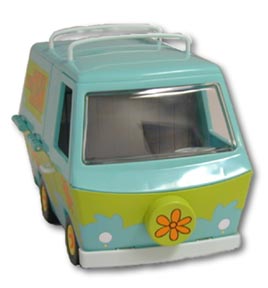 Both Scooby and Shaggy feature 9 points of articulation (neck, shoulders, elbows, hips and knees). While the larger action figures are cool in their own right, these are the Scooby-Doo figures I've been hoping for since 1969.

The Mystery Machine, too, is just a great toy. Now, granted this isn't a hyper-realistic, down-to-the-last detail item. This is a toy. It looks great and it's packed with playability, and that's what warrants the RTM Spotlight.

When Equity first unveiled the Mystery Machine playset at Toy Fair 2000, a Fred figure was originally planned to be included as well. Hopefully, that figure will see release. Equity has mentioned the possibility of accessory sets with additional figures and acessories to use with the Mystery Machine, or on their own. Our fingers are crossed, as we'd love to see the entire Scooby gang done in this scale.

If this set has a weakness, it's just that there isn't much going on inside the Mystery Machine. Once it's opened up, it's pretty much empty. Of course, that leaves an awful lot of room for a kid's imagination to take over so it's a minor weakness to say the least.

Simply put, if you are a Scooby Doo fan...you need this toy. What kid didn't dream of having their own Mystery Machine? Now, thanks to the folks at Equity Marketing, you can! 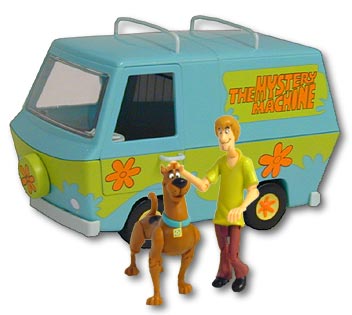