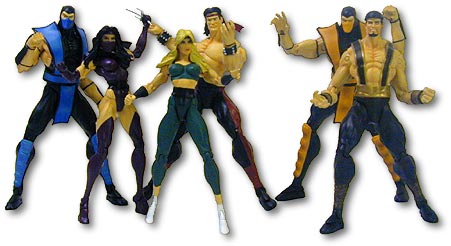 Infinite Concepts first showed prototypes of their Mortal Kombat action figures back at Toy Fair '99. For the first time the long-running Mortal Kombat franchise was getting the action figures it deserved with these all-new, wondefully articulated figures. Now, at last, the figures are arriving in stores. Were they worth the wait? The monkeys here in RTM's Toy Testing Labs think so!

According to Infinite Concepts:


"This unique design maintains the human, animal or cartoon figure's anatomical Joint Integrity. Pains-taking attention to esthetic design and unique use of production parts and connections achieve a more fluid and natural transition within each individual articulation point's extreme degrees of movement."

As you can see in the series of photographs below, featuring the Lui Kang figure, the articulation and the sculpt actually work together, especially in the shoulder, elbows and knees. Whereas most standard elbow and knee joints feature a straight cut that leaves a large gap when the joint is flexed, the design of these figures actually forms the apex of the elbow and knee.

One of the big selling points for this new line is simply the figures poseability and playability. Martial arts figures should be able to move in a variety of poses. These do. The number of poses that can be achieved, and held, by these figures is astounding.

"The totally unique and unprecedented ankle joint allows for the figure to literally shift its weight to counter-balance itself, creating a Center Of Gravity. Now when a figure is posed, anywhere feet are planted they stay parallel and flat to the angle of the plane that they are on. This enables variations of poses previously unavailable in the action figure market!"

It may be difficult to tell from the picture of Scorpion's foot (above, right) since all the pieces are black, but the foot is actually two pieces, which allows the figure to balance even if the foot itself is placed on an angle. 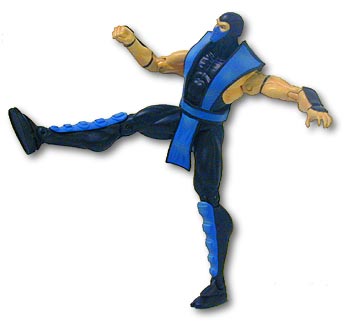 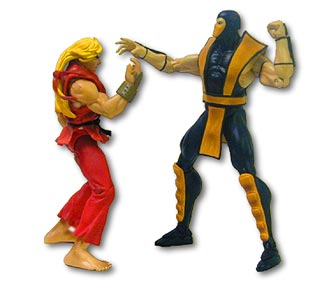 And if you are curious how Infinite Concept's Mortal Kombat figures stack up to ReSaurus' Street Fighter figures....the MK figures are on a slightly larger scale, but they are close enough to make a nice display of figures from two of the most popular video game series in history.

Infinite Concepts is currently hard at work on Series 2 for Mortal Kombat which will include such fan favorite characters as Johnny Cage, Rayden, Reptile and the half-dragon Goro.