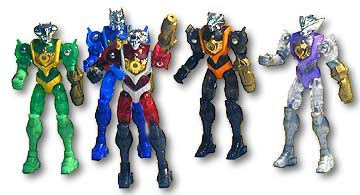 This edition of the RTM Spotlight focuses on an entire line of toys, rather than just a single figure. The line in question is Takara's long-running Microman series.

Older collectors may have fond memories of a toyline, put out by Mego in the U.S., called The Micronauts (which was also a comic book hit for Marvel Comics at the time). What we remember as Micronauts is actually the Japanese Microman line.

The figures were first released in Japan in 1974. Takara was producing a 12" line called Henshin Cyborg, and Microman basically got it's start as a smaller version of that line. Microman tells the story of the diminuative, yet heroic, Microman race who come to earth chasing the evil Acroyer.

Like all successful toylines, Microman (and Micronauts) eventually ran out of steam. And, like a fortunate few toylines, Microman found itselt resurrected in the late 1990s and is enjoying new life once again in an updated format.

The new Microman line launched in 1998 with the Mange-Powers line. (shown above) These new 3.5", super-articulated action figures kept the spirit of the original Microman line (such as translucent plasit, but with more of a '90s sensibility (better sculpting, more dynamic looking). They also contained several magnets, in the hands, feet and chest that allowed the figures to "pick up" other figures, or accessories in the line. There was also a Microman anime series running for awhile, although that was canceled. A Microman manga continues to run in a magazine called Bon-Bon.

Much like Bandai's Power Ranger line, Microman refreshes itself each year. The Magne-Powers series gave way to Super-Microman (which were even more articulated) which has yielded to the current L.E.D. Powers series. (The picture shown below, right compares Magne-Power Arthur with his L.E.D. Powers counterpart)

The L.E.D. Powers features a bright (and we mean bright) L.E.D. in the chest of the figures that is activated with a battery pack.

There are far, far too many items in the new Microman lines to show, or even mention here in the RTM Spotlight. I just wanted to supply a quick look at this very cool, very fun toyline.However, there are two excellent Microman resources online that will give you a detailed look at the line past, present and future. Both are highly recommended. 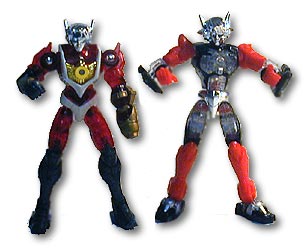 There are several transforming features to many of the Microman accessories, with real world items such as soda bottles (as in the Mr. Grey set shown below), Cup O' Noodles, Cassette tapes, and more. Of course, Takara also makes the enduring Transformers line - and there is a certain degree of cross-pollination between the two product lines.

Microman is only available in the U.S. through import dealers. Diamond Comic Distributors is offering some of the Takara Microman reissue figures (reissues of the older figures from the 1970s and early 80s) through it's Previews catalog, so keep an eye on future issues for more Microman offerings and talk to your local comics retailer for information on ordering.

There are several online dealers who offer Microman figures. Listed below are a couple that I have used, and have been very happy with:

I hope you enjoyed this very brief tour of Takara's Microman line. When I was a kid The Micronauts was my absolute favorite toyline and it's been alot of fun to revist that world with the newest Microman action figures.