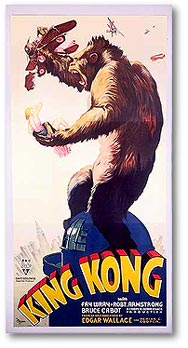 King Kong is one of the greatest monsters to ever grace the silver screen. The classic 1933 film, starring Robert Armstrong, Bruce Cabot, Fay Wray and the amazing special effects of stop motion animator Willis O'Brien. The film has made a huge impact on pop culture, and the giant ape is known around the world.

For such a long-lasting, recognizable character merchandising of Kong has been surprisingly sparse over the last 60-plus years.

While the figure is nowhere near to scale with the other releases in the Movie Maniacs line, he doesn't stand considerably taller than any of the other figures and comes complete with a terrific display stand like the one used in the film when Carl Denham (played by Robert Armstrong) unveiled the captive Kong to the world.

McFarlane's Kong action figure definitely shows off the strengths that McFarlane Toys has come to be known for: dynamic sculpting, and superior paint ops. This is definitely amazing looking figure. While liberties are taken with Kong's appearance (he strays from the design of the original movie) the spirit of the great ape is certainly apparent in the sculpting of this figure. 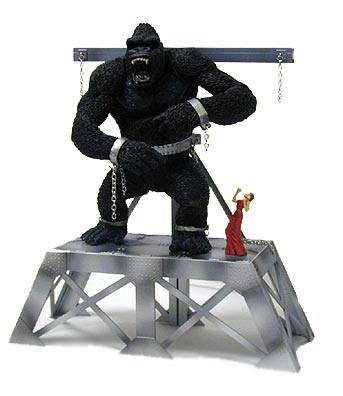 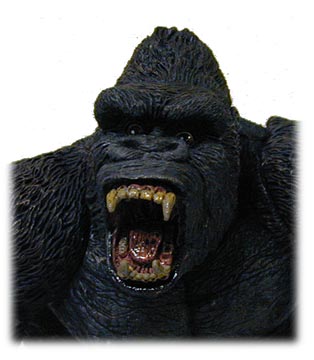 The most impressive part of the Kong figure is the detail in the head.

From the expression, to the eyes, to the disgusting set of teeth (evidence of a poor dental plan on Skull Island) the detail in both the sculpting and the paint jobs is exceptional. Use of gloss paint on the eyes really brings the figure to "life".

The teeth, especially, have that creepy McFarlane-thing going one where you just feel a bit queasy if you stare at 'em for too long! They're disgusting. 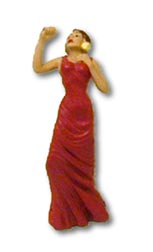 The set also comes with a small, non-poseable figure of a damsel in distress. We hesitate to say this is supposed to be Fay Wray's Ann Darrow characters as she was a blonde in the film, and this figure depicts a brunette.

While it would have been nice if the hands of the Kong figure were able to hold the damsel, but that's a fairly minor point. This is an impressive set, worthy of a cinematic creation that has earned his place in movie history.