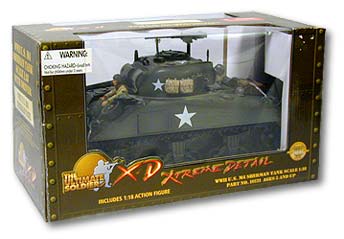 The launch of the line focuses on the World War II era, with future releases next year expanding to Vietnam and Modern military releases.

If you are going give a line a name like Xtreme Detail you had better be prepared to live up to that moniker. 21st Century Toys has already established a solid reputation in the 12" (or 1/6 scale) action figure genre for their attention to detail and the company has put all that experience into this smaller scaled line in spades.

One of the first releases to hit shelves is the United States M4 Sherman Tank, which comes with an exclusive Tank Driver action figure. These 1:18 scale figures stand slighty smaller than 3-3/4" G.I. Joes. The figures themselves are just as detailed as the vehicles, and feature some of the most innovative articulation seen on a figure of this size. Because of the scale, comparisons with Hasbro's G.I. Joe: A Real American Hero line are inevitable. However, these two lines are worlds apart, both in design and intent. 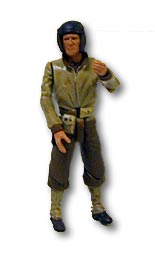 Whereas the G.I.Joe army takes considerable liberties with reality (especially as the line progressed throughout the 1980s and early 1990s), 21st Century Toys is setting out to be as authentic as possible. While there is alot of playability in the line, there is also a sense of the products as pre-built models.

Getting back to the figures articulation, there are standard swivel-type joints and the shoulders, hips, wrists and tops of the boots. At the elbows and knees there are angled swivel joints. To get a bent knee, so a figure can sit, you must swivel the leg around at the knee, and then swivel the foot back around so that it points the correct direct. While this may hinder "play" factor, it is a very interesting approaching to finding a happy medium in the constant articultion vs. sculpt battle.

A cool as the figures are, it's really the vehicles that are the shining stars of the Xtreme Detail line.

When the ever-curious monkeys in the RTM Toy Testing Labs got their hands on the Sherman Tank, they were simply astounded with the overall coolness of this toy. 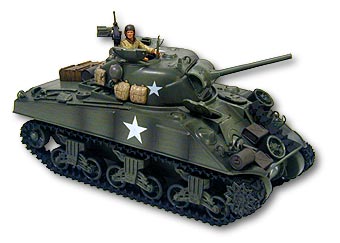 Before even getting around to fiddling with all the cool features of the tank, one cannot help but just stare at all the little detail added to the iron beast. The surface of the tank is adorned with satchels, crates, gas cans, tools, and even the helmets of German soldiers.

The paint job is terrific, and just adds to the overall sense of realism. While it seems a few shortcuts were taken (some of the small tools on the tanks surface are left unpainted), those are minor points. Overall, the tank just looks awesome.

Once you're done looking at the tank, it's time to start playing with all the features. There are several opening hatches (two on the front on the tank, and the main hatch on the turret) which the figures can be placed in.

The working treads are a nice touch. No fake wheels hidden under the chassis here. All the wheels work smoothly.

The top-mounted machine gun emplacement swivels and rotates. The small gun on the front of the tank moves.

Judging from the Sherman Tank, and the just released German Kubelwagon, 21st Century Toys has a real winner on their hands with the Ultimate Soldier Xtreme Detail line. This line is perfect for those who have been marveling at 21st Century's 1:6 scale vehicles, but either couldn't afford them or didn't have room for them. 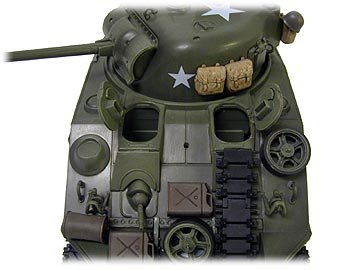