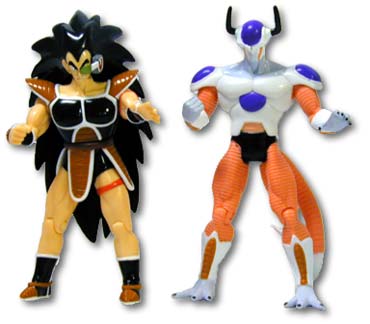 Irwin Toy has been releasing Dragonball Z action figures, based on the hit manga and anime series created by Akira Toriyama, for awhile now. Up until just recently the figures have be repackaged versions of figures that were previously released in Japan by Bandai Japan, or in Europe by AB.

With the recently release of Series 14 and 15, Irwin has started producing the figures themselves and they are terrific. Not only is Irwin producing some characters from the series who have never had an action figure before, but they've upped the quality of the sculpts and articulation as well. Whereas the previous releases had no articulation at all beneath the waist, these new figures feature both hip and knee articulation. This is on top of neck and ball-jointed shoulders, too. Great stuff.

While the new releases are still referred to as Series 14, 15, etc...this numbering doesn't actually appear on the new packaging (which has also seen a much needed overhaul), and rightly so as these all-new figures are a whole new ballgame. However, each figure is identified by the Saga (series of episodes) from which it's taken (i.e. Frieza II from the Frieza Saga)

As of this writing (September 2000) Series 14 (Master Roshi, Raditz, Bulma, Nappa and Garlic Jr.) and 15 (Jeice, Burter, Frieza II, Yajirobe with Korin, and Chiaotzu), have just been released. Series 16 (below) (Krillin, Trunks, Chi Chi, Dende and King Kai with Bubbles). 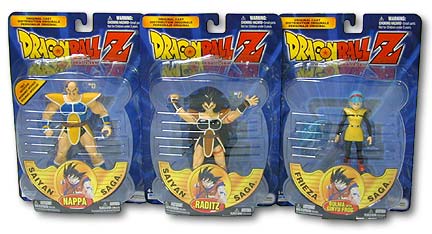 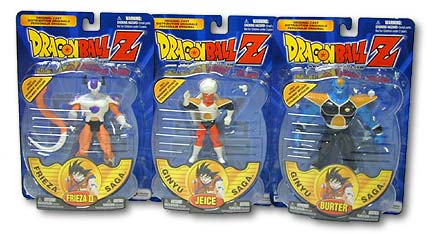 To add to the collectibility of the line Irwin is releasing different packaging to the mass and specialty markets. The Specialty market variants will feature a special silver logo, and will be produced in limited quantities. So, completists better be alert! You've got some hunting to do!

Dragonball fans may have noticed the lack of major characters in Irwin's initial releases in the all-new line. Fear not, while the line ups for Series 17 and beyond haven't been finalized yet, all-new versions of major characters like Goku, Vegeta and Piccolo will start being worked into upcoming assortments. Irwin has every intention of making alot of extremely happy Dragonball Z fans.