The Devil, You Say!

Long ago, Demons ruled the violent land until, one day, a great cataclysm imprisoned all the demons in an icy tomb. There they slept until the fated Armageddon. Now, the Demons are waking up. The only hope to fight the demons and save mankind is to become a demon.

Akira Fudo is possessed by a Demon, but his pure soul can control the Demon within him. That's the general premise behind Go Nagai's Devilman franchise, which he started in 1972 with the Devilman manga. Devilman's very popular and has lots of TV series, OAV's, Movies, Manga plus a huge amount of action figures. Its strange, almost every Japanese toy company makes Devilman toys, so theirs a very large amount of merchandise out there. Combine that with the fact that Devilman's had many different "looks" over the years and that results in lots of Devilman toys.

Fewture Models puts out some very "horrific" Devilman figures. Many of the newest figures coming out were featured in RTM's SDCC coverage. You could consider the Fewture line the most active Devilman line around today. All the figures in the Fewture line have very high caliber sculpts, excellent paint jobs and an impressive array of articulation. They are pretty big, too. Most of the figures are around 8 or 9 inches, while a few oddballs are more than a foot tall. Fewture also gives a large range of characters to choose from. These cost about $25 each in Japan but Previews offers them to comics shops and specialty stores for approximately $16, so you get a lot of bang for your buck with these big guys.

In Fewture's first series of Devilman toys each figure came with a bonus part. When you collected them all you got a glow in the dark Devilman skeleton toy. Right now Fewture is banking on the new "Devilman: Apocalypse of Amon" OAV with a whole slew of figures. Fewture is doing Akira, Ryo, and Miki, along with many more new entries. One nifty little feature in some of the new ones is their interlocking "ice" base, and underneath the base you get a fossilized demon skeleton.

Medicom has Manga and TV series incarnation of Devilman as a part of their "Miracle Action Figure" line. These are nicely articulated figures with pretty snazzy detail (yup, I'm starting to sound like a broken record, but its true). They stand around 6 inches tall, and go for about $15 to $20. Medicom also produces Devilman in 12 inches of fully poseable cloth costume glory, these high end figures go for about $95 a piece. The Kubrick incarnations of Devilman are also put out by Medicom. These little 3 packs run about $12 in comic shops. Medicom has three Devilman Kubrick sets planned so far. The first has been released, and the second should be in stores soon.

Kaiyodo has produced some nice figures, as seen in the RTM Spotlight a few weeks back. These are along the same lines as Medicom miracle action figures. There are also, an obnoxious amount of "repaints" of these figures.

Marmit has put out some basic PVC action figures based on the original Devilman TV series from the 70's. They are faithful to the 70's designs and can be had fairly inexpensively. Marmit was also nutty enough to put out a die-cast version of the Classic TV series Devilman, which features a very nice amount of articulation, and is able to do some trademark posing. It retails for about $55. A 12" Marmit doll of Miki Makimura the female lead from Devilman will also be released soon. 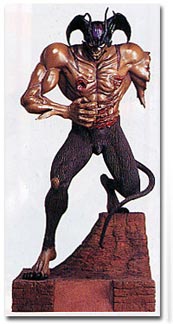 Moby Dick is putting out a life-sized Devilman statue (left). Sure, technically it's not a "toy", but still certainly worth noting. ISt's the kinda thing that would look perfect in the garden next to the ceramic bullfrog.

Takara's put out a 12" Sirene figure from the Devilman series

Oh, you better believe theirs Devilman Gashapon, so be on the lookout for those sets. Banpresto has also put out a line of 3 ľ inch tall action figures, with most of the cast from the original TV series. These are some pretty cool little figures, very similar to the way Star Wars figures are articulation wise. These guys are also cheap, they can usually be had for about $5 and they come with an accessory.

There's more! Lots more, there's some collectibles put out by uni-five, vintage stuff, and theirs also the limited ark Devilman figure, theirs a whole lot more, so go check out some Devilman merchandise already. For starters you can check Just Be, Hobby Link Japan, and Action Ace, also check your local comic shops.