[The opinions expressed in this column are those of the author, and do not necessarily reflect the views or opinions of Raving Toy Maniac Magazine]

Ryan Brookhart is the former creator and editor of Go Figure magazine, and has worked with, and for, several toy companies on everything from packaging to advertising.

Having just returned from Comic Con 2000, I am compelled by some powerful urge to express my feelings about what I've just seen. In a very real sense, this years convention was my first as a civilian; I could view things from a purely fan-boy based excitement/disappointment factor without apology. And while this statement is true to a degree, I must also confess I am still very much part of the toy industry in terms of certain projects. But really, on this trip to the Con, I had no business cards and no desire to push my wares.

Over the past couple of years (including this one), I've noticed a certain "scaled-down" look and feel to the Con; in years past the Marvel, DC, and other displays were loud, garish, and totally fun. The Dark Horse area a few years back with their full scale Warrior Bug from Starship Troopers comes to mind as does the huge video wall from DC blasting images from DC properties. I'm sure you too remember the excitement that surged though the main hall, the excitement that seemed to radiate outward from the amazing Spawn alley set-up a few years back. The year of Spawn seems an awful long time ago now, doesn't it?

While I won't list everything I liked and disliked, I thought a few companies showings proved informative on a grand scale. Firstly, Palisades. The truth is this company has a formidable knowledge of the fan base they're targeting and I believe they will be a major force in the toy industry in years to come. The Front Mission figures are amazing, the newest Final Fantasy product is the strongest the company has yet released. And best of all, Palisades will be releasing Ninja Scroll figures. As an Anime property this may not quite have the same cache as, say, AKIRA, but it comes mighty close for Anime fans like myself. If you don't have a clue what Ninja Scroll is, run to your nearest video store, provided they're cool enough to carry a wide selection of Anime, and buy a copy of Scroll. Then you'll understand why I'm so excited about the prospects of this line of figures. It's a telling thing when a company is savvy enough to understand the timely (and timeless) appeal of certain properties. Ninja Scroll is by no means a new animated film, but it has a great fan base that grows with the ranks of the newly initiated in the Anime field. 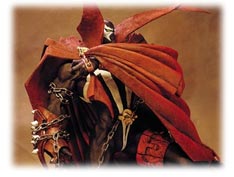 Another notable element at this years Con was the near-complete absence of Todd McFarlane. Yes, a certain number of figures (soon to be released figures) were shown behind glass cases. And yes, many of them looked very nice. But as for the man, a Spawn alley, a slick display, anything? No, nothing. So I was left with the toys. And in a very real sense, it is Todd McFarlane's toys that has prompted this letter.

You see, when I first encountered the Spawn toys I was really impressed. Though not the super detailed, hyper sculpted pieces of plastic they are today, those first figures, coming from an independent company no less, gave notice someone was out there ready to shake things up a bit in the mundane world of action figures. With each subsequent release of McFarlane product (were talking toys here, not the comic) the quality got vamped up considerably. I think the height of this for me is his Dark Ages line (both I & II). With a few hiccups along the way in terms of quality control, McFarlane's vision of figures seemed to mature with the new sophistication of his audience, in terms of the quality they now expected not only from him but from his competitors. Indeed, he was the maker of the Ultra Action Figure. All hail, McFarlane.

And that was then. And I'm sorry to say the past does not equal the foreseeable future. To put in bluntly, the Spawn series 17 and the new line of Movie Maniacs coming soon are not Ultra Action Figures. They are not, in fact, toys at all. To be fair, there is some apparent articulation in a couple of the figures in the Spawn 17 line. But let me be clear, only SOME articulation. As for the Ash figure from Movie Maniacs? Like the pose he's in? Great! Don't like it? Tough. Like the pose Snake Plisken's in? I sure as hell hope so, 'cause that's all you're gonna get my friend. And going back to Spawn 17 for a moment, the classic Spawn figure (ironically the first figure I purchased from McFarlane way back when and now re sculpted) is nothing more than a cool looking sculpture. Am I appalled? Yes. Why? You're about to find out... 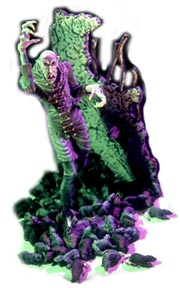 My last comments go to Art Asylum. Right up front I'll tell you I'm good friends with the director of Art Asylum. But that being said, I've never claimed the Asylum has always hit a home run in terms of product. My friend knows this. But as far as consistency goes, as far as steady vision and unrelenting quality goes, Digger and his inmates at the Asylum are unparalleled. The only time things don't seem to work for them in terms of final product is in the CHEAPNESS of some of the companies that have used their services. Nuff said about that.

Over the last few years I have seen the Art Asylum grow from a scrappy little powerhouse of a company to what it is today, a small company poised on the big prize. I truly feel we will one day see films coming from the Art Asylum. We will see clothes coming from Art Asylum, comics, and yes, toys. Lots of toys. And you know what? These toys will be ARTICULATED! Why is that such a big issue to me, you might ask? Because of this. Toys, the very nature of what a toy is, cannot be reshaped and bent to the will of people like Todd McFarlane, or Mattel, or Hasbro, or Digger. They are things that beg to be played with, admired, and played with some more. Toys are not static sculptures, and sculptures are not toys. My case and point is Spawn from Spawn 17. He is a great sculpture. And he would look great in a glass case. But he is removed from any real interaction I might want to have with him as a toy. What if I wanted to raise his arm or remove his cape and lower his leg in a battle stance? Can't do it. Why? Because he's not a toy.

Now turn to Graf Orlok from the Silent Screamers line. He, like Spawn, comes with a base. And he too is sculpted with impeccable detail. But that's where the similarities end. Graf Orlok is a toy in the purest sense of the word. You can pose his legs, his wrists, his arms, his head. Art Asylum trusts me that I have the power to bend this figure to my will because it is a toy for me, for the public. After close examination of all the figures from the Silent Screamers line I can say the action figure buying public is in for a mighty treat.

What I think has happened in the world of action figures is directly caused by the success and vision of Todd McFarlane. The Silent Screamers are clearly related in spirit to all that McFarlane toys has done in the past few years. B.M. (or before McFarlane), there is no watermark to the kind of detail he's imbued in toys. A.M. (or....you get it) everyone is trying for a better sculpt, the right wash, the new articulation. And then in an about face, McFarlane rejects his own movement and pulls back to reveal less articulation over...what? Perhaps it is many things at once. Less articulation on a figure lowers the cost of said figure to produce. And on top of that, less articulation takes the figure outside of the realm of the purely defined toy.

And somehow I can't help but believe McFarlane is almost embarrassed at being a toy maker. His companies posture has moved into the esoteric in odd and distracting ways. Personally I don't want a Janis Joplin plastic sculpture. But I'm sure a few people will. But why make her? For the novelty of it, I'm sure. For the pseudo-adult nature of it, I'm sure. Because on some level a boozy dead blues singer from the 60's has a slightly forbidden edge to it. And that's what McFarlane wants. But so what? Slap Shot sculpts? Again, they're not figures. Ozzy Osborne? Again, not an Ultra anything.

And that's what makes the emergence of Art Asylum and Aztech Toys so exciting. I have spoken to Digger at length about his ideas on toys and it mirrors much of what I've heard at the conventions and chat groups and such over the last couple of years, namely ...'BRING BACK THE TOYS!!!! Well, that's what Digger plans on doing. Walking around the Comic Con this year I spotted numerous banners with the familiar Art Asylum logo attached to the best looking toys. And the comments I was hearing (and making) about Art Asylum reminded me of a few years back, when all of us in the toy world felt the paradigm shifting towards a good place.

This all makes Todd's absence all the more confusing and sad to me. I plead for Todd to return to the purer faith and make some great toys. Todd, if you still have the AKIRA license, make sure a certain character can ride his cool red bike. You know what I mean.

To Mr. Horn and Mr. Reneger over at Palisades, good work, you are on your way. Don't forget the little guys.

And to Digger, Donna, Manny, and everyone else at Art Asylum, mission accomplished. You've proven yourself the heir aparent. Now go and save the world!


To contribute to Piece of the Action, please contact RTM Editor Jeff Cope.