Why would you make a lunatic your guest of honor? This is a question that some may be asking themselves in reference to Wizard World's honoring of one of the toy industry's best known lunatics: Digger from the Art Asylum.

Almost 3 years ago, I was in the Toy Biz Toy Fair showroom chatting with then-product manager Jesse Falcon. Jesse grabbed my arm and said, "Here is the guy you have to meet!" Before me stood this intense-looking man who was dressed more like a rock star than the seemingly endless sea of suits that populate Toy Fair on any given day. As if his manner of dress and 6-foot plus frame weren't enough to make him stand out, this visage wore strangely patterned contact lenses that made his eyes glow with an eerie demonic-reptile hue. This was my first meeting with Digger.

Although some may be put off by the stylistic affectations, the man beneath the clothes is extremely articulate and downright charming at times. Within minutes of our first meeting, Digger had invited me to his Brooklyn studio that very night. Since we were in New York to cover Toy Fair (Jason Geyer was also present) we told him that we had to do a little work in the evening first and probably wouldn't be finished until 10-11p.m. This was no problem for Digger and he gave us the address and told us to stop by "whenever." 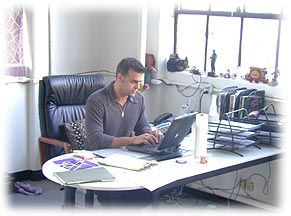 I had known of Digger from my relationship with Toy Biz and an on-line audio interview he did early on. Now I found myself in his studio, being granted access to things that I never dreamed existed. That first night, he showed us control art, sculptures and plans for so many things that I can't even recall them all. So many of those things were plans that eventually fizzled out when the winds shifted at various toy companies. I wouldn't want to break confidentiality so I can be specific in what I saw (even though most of the plans will never be revisited, I'm sure), but suffice it to say, if the Art Asylum had completed some of these projects, there would have been some very happy fans.

We stayed in the small, first-floor Art Asylum studio until nearly 3:00a.m. that first night (even though we had an 8:00a.m. appointment). It was quite an exhilirating experience. Digger is an astute student of popular culture and can converse intelligently on just about any subject from Anime to silent movies. We could have certainly stayed until the sun came up if it weren't for the overwhelming fatigue that comes with covering Toy Fair. 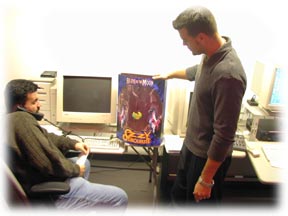 Flash forward, to a blustery October day last year. I arrived for a meeting at the Art Asylum studio mid-afternoon after covering a lame toy industry event earlier in the day. The gang had moved up in the world, both literally and figuratively. Having abandoned the small first-floor studio, I was treated to a grand tour of the new Art Asylum studio that was located directly above their old home. The new studio takes up the entire floor of the building. The design was done entirely in-house by Digger and his staff. When they acquired the space, it was just one big room. Using duct tape, they laid out where the walls would be and how each nook and cranny would be utilized. The finished product is nothing short of impressive.

As you enter the studio through the heavy metal vault door, you are immediately in the realm of the Asylum. The ante room is their showplace. Complete with colored lights, music, video, and sculpted display areas, you can't help but think that you have stepped into some sort of fun house gone awry.

The staff will tell you that the lights, music and video are not merely turned on for show when visitors are afoot. On the contrary, this light and sound show plays continuously during the Asylum's business hours. However, defining what "business hours" are is a tricky task. Given the nature of the employees at the Asylum, you don't find many nine-to-fivers. So for all practical purposes, the Asylum is open virtually 24-hours a day.

It's hard to describe the ante room and do it justice. From a huge mural of the Art Asylum Jack-in-the-Box logo on one wall, to the imbedded aquarium with the Scuba Steve action figure from the Adam Sandler movie "Big Daddy" (created by the Art Asylum, of course) surrounded by continuous bubbles to the electrified display cases in the center that pulse rhythmically....it's almost sensory overload.

But lest you think it's all an outake from a Felini movie, we quickly moved on to where the real work gets done.

Digger gets a lot of the press for the Art Asylum, but he is the first to admit that his staff deserve their share of the credit when it comes to building the company up to where it is today. I've become quite familiar with a number of the inmates whom I consider friends. I don't want to list names lest I forget someone. Suffice it to say, these are some of the most talented, creative, and demented individuals you would ever want to meet. The personalities create an oddly warm corporate culture, although "corporate" is the antithesis of just about everything the Asylum stands for.